Batavia, Ill.-Scientists of the MINOS collaboration at the Department of Energy’s Fermi National Accelerator Laboratory today (August 14) announced the official start of data-taking with the 6,000-ton detector for the Main Injector Neutrino Oscillation Search. Physicists will use the MINOS detector, located deep in an historic iron mine in northern Minnesota, to explore the phenomenon of neutrino mass.

In July, after four years of mining and construction, workers finished building the first of two detectors of the ambitious MINOS particle physics experiment. Today, after completing the hardware and testing the detector’s systems, scientists announced the official startup of data-taking with the MINOS “far” detector, ahead of the scheduled completion in April 2004. Technicians will complete the assembly of a “near” detector, smaller in size than the far detector, at Fermilab in August 2004.

“This is an important milestone in the worldwide quest to develop neutrino science,” said Dr. Raymond L. Orbach, director of DOE’s Office of Science. “The MINOS detector in Soudan, Minnesota, together with the new Fermilab neutrino beam line, will provide a detailed look at the secrets behind neutrino oscillations. It will complement the large-scale neutrino projects in Japan, Canada and Europe. Significantly, the completion of the detector comes nine months ahead of schedule.”

The looming 100-foot-long detector consists of 486 massive octagonal planes, lined up like the slices of a loaf of bread. Each plane consists of a sheet of steel about 25 feet high and one inch thick, covered on one side with a layer of scintillating plastic. To construct the detector, technicians had to transport all detector components in small sections via a narrow mine shaft in a tiny historic elevator cage that once transported miners underground.

“It was like building a ship in a bottle,” said MINOS spokesperson Stanley Wojcicki, physics professor at Stanford University. “We needed to bring all the material underground and assemble it right there. The last step was to install a magnetic coil and energize it. MINOS is the only large-scale neutrino experiment underground that can separate neutrino and antineutrino interactions, allowing us to look for differences in their behavior.”

At present, the new detector is recording cosmic ray showers penetrating the earth. The data will provide first tests of matter-antimatter symmetry in neutrino processes. In early 2005, when the construction of a neutrino beamline at Fermilab is complete, the experiment will enter its next phase. Scientists will use the far detector to “catch” neutrinos created at Fermilab’s Main Injector accelerator in Batavia, Illinois. The neutrinos will travel 450 miles straight through the earth from Fermilab to Soudan – no tunnel needed. The detector will allow scientists to directly study the oscillation of muon neutrinos into electron neutrinos or tau neutrinos under laboratory conditions. More than a trillion man-made neutrinos per year will pass through the MINOS detector in Soudan. Because neutrinos rarely interact with their surroundings, only about 1,500 of them will make a collision with an atomic nucleus inside the detector. The rest will traverse the detector without leaving a track.

Scientists have discovered three different types of neutrinos: electron neutrinos, muon neutrinos, and tau neutrinos. The particles play an important role in stellar processes like the creation of energy in stars as well as supernova explosions. Experimental results obtained over the last five years have confirmed that the evasive particles have mass and switch back and forth among their three different identities while traveling through space and matter. Scientists expect the MINOS experiment to provide the best measurement of neutrino properties associated with the so-called “atmospheric” oscillations.

Funding for the MINOS experiment has come from the Office of Science of the U.S. Department of Energy, the British Particle Physics and Astronomy Research Council, the U.S. National Science Foundation, the State of Minnesota and the University of Minnesota. More than 200 scientists from Brazil, France, Greece, Russia, United Kingdom and the United States are involved in the project. 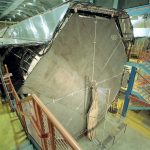 The 100-foot-long MINOS detector consists of 486 massive octagonal planes, lined up like the slices of a loaf of bread. Each plane consists of a sheet of steel about 25 feet high and one inch thick, covered on one side with a layer of scintillating plastic. The planes are numbered 0 through 485, with the last one visible in the photo. The whole detector weighs 6,000 tons. 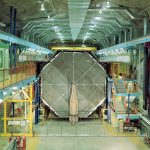 The MINOS detector is located in a cavern half a mile underground in the Soudan Underground Laboratory, Minnesota. The groundbreaking for the cavern was on July 20, 1999. The excavation of the cavern took about two years, followed by the construction of the detector. 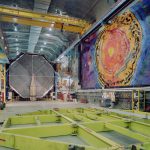 Technicians assembled each detector plane on a strongback (foreground). The whole plane was then lifted by crane and transported to its final position. It took less than two days to assemble and erect a single plane. 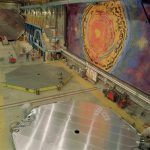 A number of university and laboratory groups in the US, UK, and Greece worked at their home institutions on the production of detector components. The groups built and tested the pieces of the plastic scintillator system and then shipped them to the Soudan mine for installation. The steel plates were produced in the US. Because all material had to enter the cavern through an old narrow shaft, the detector arrived in pieces not more than seven feet in width. The assembly took place underground (see photo). 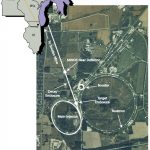 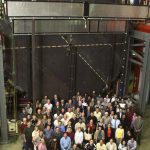 More than 200 scientists from Brazil, France, Greece, Russia, United Kingdom and the United States are involved in the project. Some of them are shown here in front of a prototype detector plane built at Fermilab. There is also a photo of collaboration members at a workshop in Minnesota in June 2000 taken by Jerry Meier, University of Minnesota. 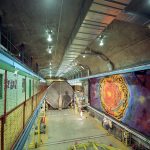 A technician casting a larger-than-life shadow on the MINOS detector. Tour groups can see the detector from the walkway to the left, just across a mural painted on the undulating surface created by the excavation. 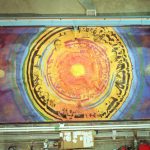 he University of Minnesota Foundation commissioned a mural for the MINOS cavern, painted onto the rock wall, 59 feet wide by 25 feet high. The mural’s fiery central focus area contains images of scientists such as Enrico Fermi and Wolfgang Pauli, Wilson Hall at Fermilab, George Shultz, a key figure in the history of Minnesota mining, and a number of surprises. “I’ve included the word ‘change’ in as many languages as people could give me translations for it,” said Joe Giannetti of Minneapolis, the artist who was featured in a National Geographic television documentary about the MINOS project. “Neutrinos are changing all the time-just as we are, just as the universe is. I’m fascinated by neutrino science, and I admire the imaginations of the scientists. A scientist had to imagine this experiment, this series of detectors. This place is a temple of the human imagination.” 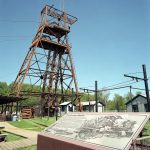 The Soudan Underground Mine was closed in 1963 and placed on the National Register of Historic Places in 1966. It is operated as a State Park by the Minnesota Department of Natural Resources, with 14 tours a day taking the historic elevator for a fast and clamorous ride nearly a half-mile below the surface. After descending, hard hat-wearing tourists can view old mine caverns with some of the equipment still standing in place. Since May 2002, tourists can also view the cavern housing the MINOS detector. 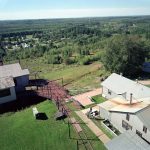 Soudan is part of Minnesota’s Iron Range. Rich ore deposits were discovered in the area in 1865. Today, underground mines have largely given way to surface mining. The Soudan Underground Mine has served as a physics laboratory since 1979. The photo shows the view from the top of the tower above the Soudan Mine shaft.