BATAVIA, Illinois-Scientists of the MiniBooNE1 experiment at the Department of Energy’s Fermilab2 today (April 11) announced their first findings. The MiniBooNE results resolve questions raised by observations of the LSND3experiment in the 1990s that appeared to contradict findings of other neutrino experiments worldwide. MiniBooNE researchers showed conclusively that the LSND results could not be due to simple neutrino oscillation, a phenomenon in which one type of neutrino transforms into another type and back again.

The announcement significantly clarifies the overall picture of how neutrinos behave.

Currently, three types or “flavors” of neutrinos are known to exist: electron neutrinos, muon neutrinos and tau neutrinos. In the last 10 years, several experiments have shown that neutrinos can oscillate from one flavor to another and back. The observations made by the LSND collaboration also suggested the presence of neutrino oscillation, but in a neutrino mass region vastly different from other experiments. Reconciling the LSND observations with the oscillation results of other neutrino experiments would have required the presence of a fourth, or “sterile” type of neutrino, with properties different from the three standard neutrinos. The existence of sterile neutrinos would throw serious doubt on the current structure of particle physics, known as the Standard Model of Particles and Forces. Because of the far-reaching consequences of this interpretation, the LSND findings cried out for independent verification.

“It was very important to verify or refute the surprising LSND result,” said Robin Staffin, DOE Associate Director of Science for High Energy Physics. “We never know what nature has in store for us. The MiniBooNE experiment was an important one to do and is to be complimented for a job well done.”

The MiniBooNE experiment, approved in 1998, took data for the current analysis from 2002 until the end of 2005 using muon neutrinos produced by the Booster accelerator at Fermilab. The MiniBooNE detector, located about 500 meters from the point at which the muon neutrinos were produced, looked for electron neutrinos created by the muon neutrinos. The experiment’s goal was either to confirm or to refute the startling observations reported by the LSND collaboration, thus answering a long-standing question that has troubled the neutrino physics community for more than a decade.

“Our results are the culmination of many years of very careful and thorough analysis. This was really an extraordinary team effort,” said MiniBooNE cospokesperson Janet Conrad of Columbia University. “We know that scientists everywhere have been eagerly waiting for our results.”

“We are delighted to see that the work of the MiniBooNE team has led to the resolution of this puzzle,” said Marv Goldberg, Program Director for Elementary Particle Physics at the National Science Foundation. “We’re proud that our support yielded such an important breakthrough for neutrino physics and we look forward to additional results from this team of university and national laboratory scientists.”

Although the MiniBooNE researchers have decisively ruled out the interpretation of the LSND results as being due to oscillation between two types of neutrinos, the collaboration has more work ahead.

“We have been studying the bulk of our data for several years,” said Fermilab physicist Steve Brice, analysis coordinator for the MiniBooNE experiment, “but we have had access to these sequestered data for only a short time. There are remaining analyses that we are eager to do next. They include detailed investigation of data we observe at low energy that do not match what we expected to see, along with more exotic neutrino oscillation models and other exciting physics.”

At this time, the source of the apparent low-energy discrepancy is unknown.

“It is great to get the MiniBooNE results out,” said Fermilab Director Pier Oddone. “It clears one mystery but it leaves us with a puzzle that is important to understand.”

The MiniBooNE collaboration will further analyze its data.

“As in many particle physics experiments, we have a result that answers some questions and raises others,” said MiniBooNE co-spokesperson William Louis, Los Alamos National Laboratory, who also worked on the original LSND experiment. “We live in interesting times.”

For its observations, MiniBooNE relies on a detector made of a 250,000-gallon tank filled with ultrapure mineral oil, clearer than water from a faucet. A layer of 1280 light-sensitive photomultiplier tubes, mounted inside the tank, detects collisions between neutrinos made by the Booster accelerator and carbon nuclei of oil molecules inside the detector. Since January 2006, the MiniBooNE experiment has been collecting data using beams of antineutrinos instead of neutrinos and expects further results from these new data. 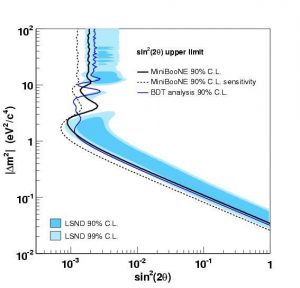 The observations made by the LSND experiment in the 1990s suggested the presence of neutrino oscillation in a neutrino mass region (blue shaded areas) vastly different from other experiments (which are outside the region shown in this plot, at much smaller values of Δ m2). The MiniBooNE experiment rules out the region to the right of the black and blue lines, ruling out the simple two-neutrino oscillation interpretation of the LSND data. 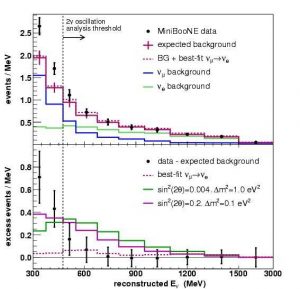 The top plot shows the raw number of electron neutrino events recorded by the MiniBooNE experiment (black dots). The bottom plot shows the number of excess events observed after subtracting the background. The solid curves in the bottom plot show two examples (green and purple curves) of predictions made for electron neutrino excess according to the two-neutrino oscillation interpretation of the LSND results. The MiniBooNE data rule out such two-neutrino oscillation predictions. 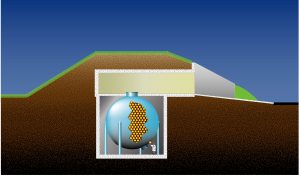 The MiniBooNE experiment relies on a 250,000-gallon tank filled with mineral oil, which is clearer than water from a faucet. Light-sensitive devices (PMTs) mounted inside the tank are capable of detecting collisions between neutrinos and carbon nuclei of oil molecules 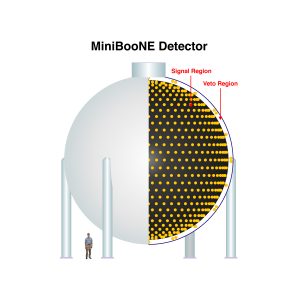 A close-up view of the MiniBooNE tank shows the inner layer of 1280 photomultiplier tubes (PMTs) that detects neutrinos produced by Fermilab’s Booster accelerator. A second layer of 240 PMTs, still inside the tank but facing outward, detects signals caused by cosmic ray showers. 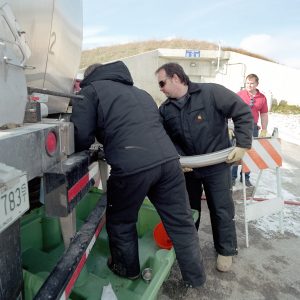 Filling of oil into MiniBooNE Tank 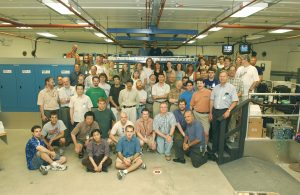 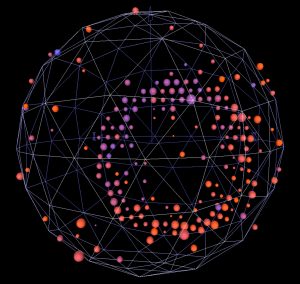 A neutrino signal observed by the MiniBooNE experiment. 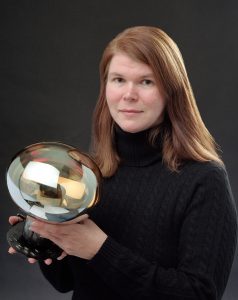 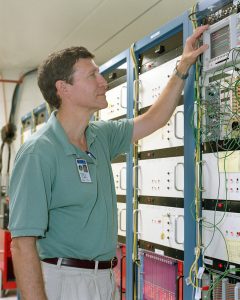 MiniBooNE cospokesperson Bill Louis, here checking the MiniBooNE data acquisition system, is a scientist at Los Alamos National Laboratory. In the 1990s, he worked on the LSND experiment, which triggered the idea for the MiniBooNE experiment. 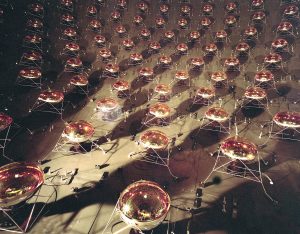 A close-up of the interior of the MiniBooNE tank, before it was filled with ultrapure mineral oil. 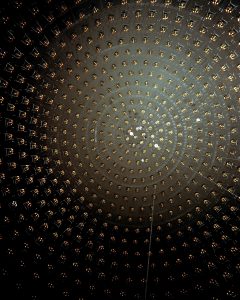 The inside of the MiniBooNE tank is covered with 1280 inward-facing photomultiplier tubes. The picture shows a section of the upper hemisphere of the tank.

Take a virtual tour of MiniBooNE

Scientists of the MiniBooNE collaboration will present their results at the meeting of the American Physical Society in Jacksonville, Florida on April 16. Conference organizers have arranged for a press briefing at 1 PM (EDT) on April 16.

1 The MinibooNE experiment, formally known as the Booster Neutrino Experiment, is an international collaboration of scientists involving 77 physicists from 17 institutions in the U.S. and the United Kingdom who conduct the MiniBooNE experiment at Fermilab. MiniBooNE physicists are supported by funding from the U.S. Department of Energy and the U.S. National Science Foundation.

2 Fermi National Accelerator Laboratory is a Department of Energy Office of Science national laboratory operated under contract by the Fermi Research Alliance, LLC. The DOE Office of Science is the single largest supporter of basic research in the physical sciences in the United States.