The Dark Energy Survey, a global collaboration including the Department of Energy’s Fermi National Accelerator Laboratory, the National Center for Supercomputing Applications, and the National Science Foundation’s NOIRLab, has released DR2, the second data release in the survey’s seven-year history. DR2 is the topic of sessions today and tomorrow at the 237th Meeting of the American Astronomical Society, which is being held virtually.

The second data release from the Dark Energy Survey, or DES, is the culmination of over a half-decade of astronomical data collection and analysis with the ultimate goal of understanding the accelerating expansion of the universe and the phenomenon of dark energy, which is thought to be responsible for this accelerated expansion. It is one of the largest astronomical catalogs released to date.

Including a catalog of nearly 700 million astronomical objects, DR2 builds on the 400 million objects cataloged with the survey’s prior data release, or DR1, and also improves on it by refining calibration techniques, which, with the deeper combined images of DR2, lead to improved estimates of the amount and distribution of matter in the universe.

Astronomical researchers around the world can access these unprecedented data and mine them to make new discoveries about the universe, complementary to the studies being carried out by the Dark Energy Survey collaboration. The full data release is online and available to the public to explore and gain their own insights as well. 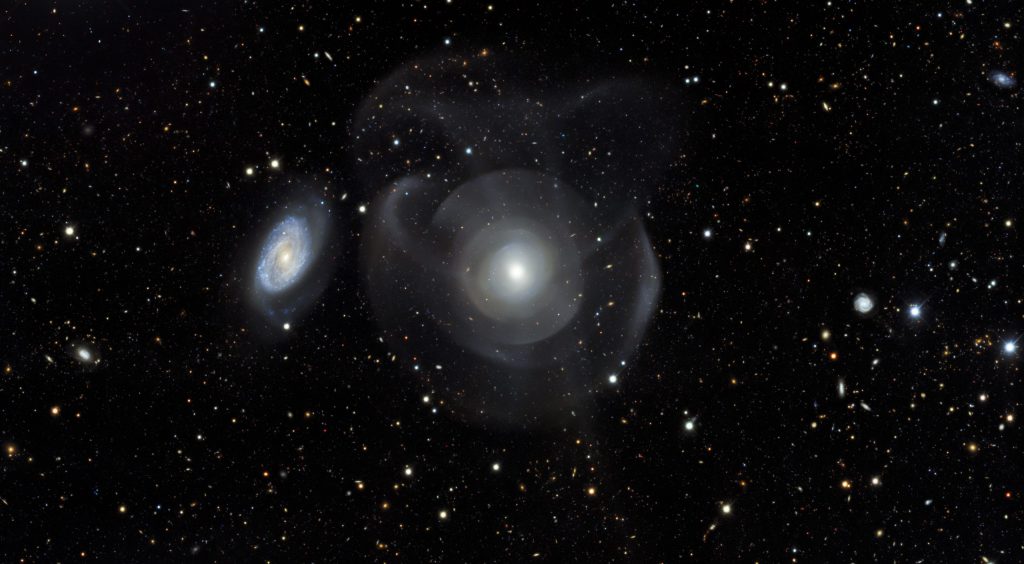 Shown here is the elliptical galaxy NGC 474 with star shells. Elliptical galaxies are characterized by their relatively smooth appearance as compared with spiral galaxies, one of which is to the left of NGC 474, which is oriented with South to the top and West to the left. The colorful neighboring spiral (NGC 470) has characteristic flocculent structure interwoven with dust lanes and spiral arms. NGC 474 is at a distance of about 31 megaparsecs (100 million light-years) from the sun in the constellation of Pisces. The region surrounding NGC 474 shows unusual structures characterized as ‘tidal tails’ or ‘shells of stars’ made up of hundreds of millions of stars. These features are likely due to recent (within the last billion years) mergers of smaller galaxies into the main body of NGC 474 or close passages of nearby galaxies, such as the NGC 470 spiral. For coordinate information, visit the NOIRLab webpage for this photo. Photo: DES/NOIRLab/NSF/AURA. Acknowledgments: Image processing: DES, Jen Miller (Gemini Observatory/NSF’s NOIRLab), Travis Rector (University of Alaska Anchorage), Mahdi Zamani & Davide de Martin. Image curation: Erin Sheldon, Brookhaven National Laboratory

DES was designed to map hundreds of millions of galaxies and to discover thousands of supernovae in order to measure the history of cosmic expansion and the growth of large-scale structure in the universe, both of which reflect the nature and amount of dark energy in the universe. DES has produced the largest and most accurate dark matter map from galaxy weak lensing to date, as well as a new map, three times larger, that will be released in the near future.

One early result relates to the construction of a catalog of a type of pulsating star known as “RR Lyrae,” which tells scientists about the region of outer space beyond the edge of our Milky Way. In this area nearly devoid of stars, the motion of the RR Lyrae hints at the presence of an enormous “halo” of invisible dark matter, which may provide clues on how our galaxy was assembled over the last 12 billion years. In another result, DES scientists used the extensive DR2 galaxy catalog, along with data from the LIGO experiment, to estimate the location of a black hole merger and, independent of other techniques, infer the value of the Hubble constant, a key cosmological parameter. Combining their data with other surveys, DES scientists have also been able to generate a complete map of the Milky Way’s dwarf satellites, giving researchers insight into how our own galaxy was assembled and how it compares with cosmologists’ predictions.

Covering 5,000 square degrees of the southern sky (one-eighth of the entire sky) and spanning billions of light-years, the survey data enables many other investigations in addition to those targeting dark energy, covering a vast range of cosmic distances — from discovering new nearby solar system objects to investigating the nature of the first star-forming galaxies in the early universe.

“This is a momentous milestone. For six years, the Dark Energy Survey collaboration took pictures of distant celestial objects in the night sky. Now, after carefully checking the quality and calibration of the images captured by the Dark Energy Camera, we are releasing this second batch of data to the public,” said DES Director Rich Kron of Fermilab and the University of Chicago. “We invite professional and amateur scientists alike to dig into what we consider a rich mine of gems waiting to be discovered.” 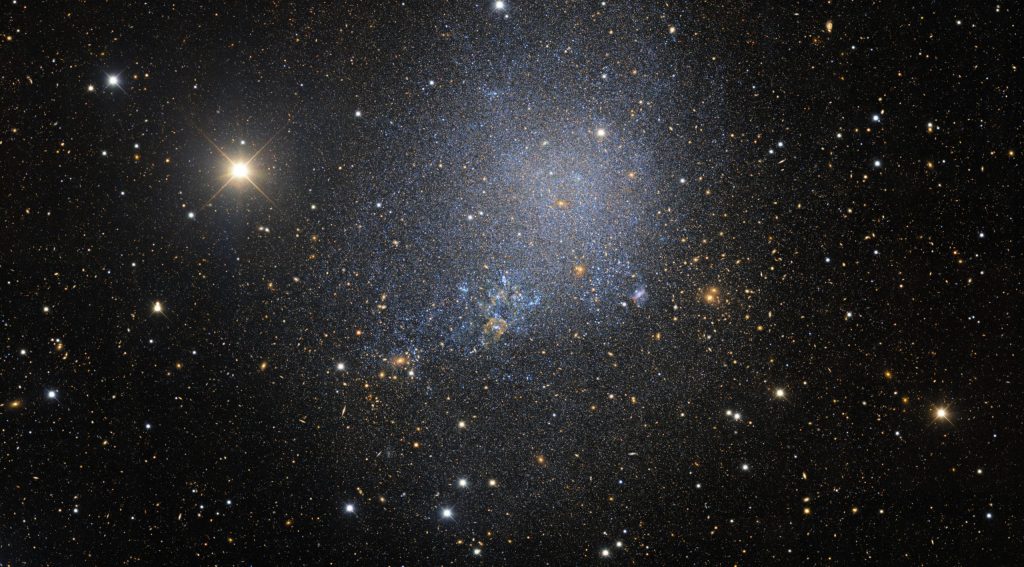 This irregular dwarf galaxy, named IC 1613, contains some 100 million stars (bluish in this portrayal). It is a member of our Local Group of galaxy neighbors, a collection which also includes our Milky Way, the Andromeda spiral and the Magellanic clouds. 2.4 million light-years away, it contains several examples of Cepheid variable stars — key calibrators of the cosmic distance ladder. The bulk of its stars were formed about 7 billion years ago, and it does not appear to be undergoing star formation at the present day, unlike other very active dwarf irregulars such as the Large and Small Magellanic clouds. To the lower right of IC 1613 (oriented with North to the left and East down in this view), one may view a background galaxy cluster (several hundred times more distant than IC 1613) consisting of dozens of orange-yellow blobs, centered on a pair of giant cluster elliptical galaxies. To the left of the irregular galaxy is a bright, sixth magnitude, foreground Milky Way star in the constellation of Cetus the Whale, identified here as a star by its sharp diffraction spikes radiating at 45 degree angles. For coordinate information, visit the NOIRLab webpage for this photo. Photo: DES/NOIRLab/NSF/AURA. Acknowledgments: Image processing: DES, Jen Miller (Gemini Observatory/NSF’s NOIRLab), Travis Rector (University of Alaska Anchorage), Mahdi Zamani & Davide de Martin

The primary tool in collecting these images, the DOE-built Dark Energy Camera, is mounted to the NSF-funded Víctor M. Blanco 4-meter Telescope, part of the Cerro Tololo Inter-American Observatory in the Chilean Andes, part of NSF’s NOIRLab. Each week, the survey collected thousands of pictures of the southern sky, unlocking a trove of potential cosmological insights.

Once captured, these images (and the large amount of data surrounding them) are transferred to the National Center for Supercomputing Applications for processing via the DES Data Management project. Using the Blue Waters supercomputer at NCSA, the Illinois Campus Cluster and computing systems at Fermilab, NCSA prepares calibrated data products for public and research consumption. It takes approximately four months to process one year’s worth of data into a searchable, usable catalog.

The detailed precision cosmology constraints based on the full six-year DES data set will come out over the next two years.

The DES DR2 is hosted at the Community Science and Data Center, a program of NOIRLab. CSDC provides software systems, user services and development initiatives to connect and support the scientific missions of NOIRLab’s telescopes, including the Blanco Telescope at Cerro Tololo Inter-American Observatory.

NCSA, NOIRLab and the LIneA Science Server collectively provide the tools and interfaces that enable access to DR2. 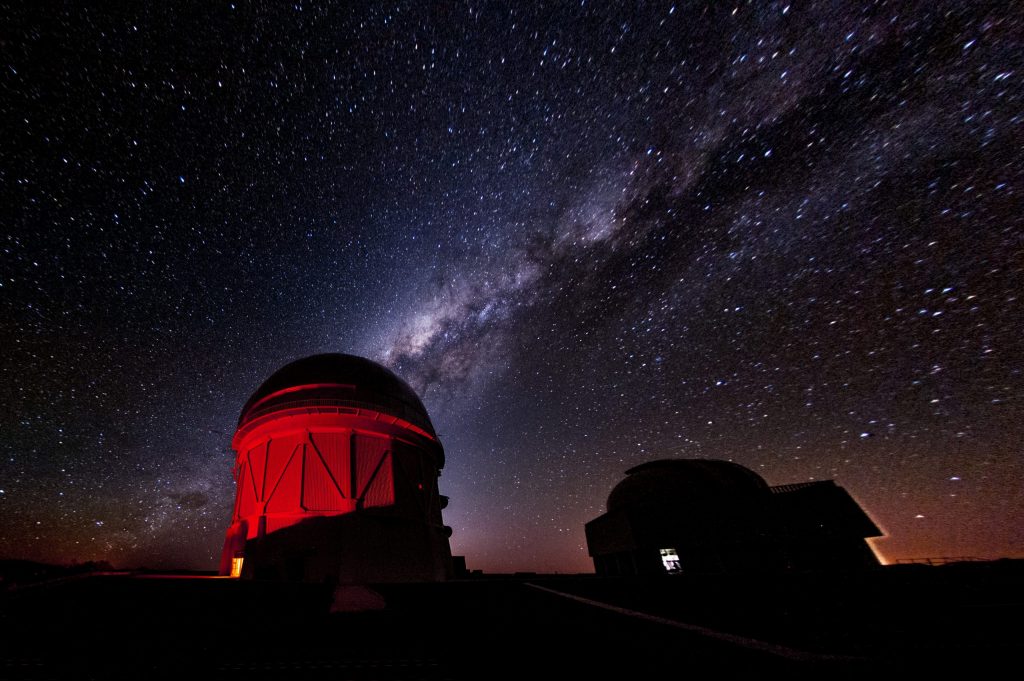 The Dark Energy Survey uses a 570-megapixel camera mounted on the Blanco Telescope, at the CTI Observatory in Chile, to image 5,000 square degrees of southern sky. Photo: Fermilab

“Because astronomical data sets today are so vast, the cost to handle them is prohibitive for individual researchers or most organizations. CSDC provides open access to big astronomical data sets like DES DR2 and the necessary tools to explore and exploit them — then all it takes is someone from the community with a clever idea to discover new and exciting science,” said Robert Nikutta, project scientist for Astro Data Lab at CSDC.

“With information on the positions, shapes, sizes, colors and brightnesses of over 690 million stars, galaxies and quasars, the release promises to be a valuable source for astronomers and scientists worldwide to continue their explorations of the universe, including studies of matter (light and dark) surrounding our home Milky Way galaxy, as well as pushing further to examine groups and clusters of distant galaxies, which hold precise evidence about how the size of the expanding universe changes over time,” said Dark Energy Survey Data Management Project Scientist Brian Yanny of Fermilab.

This work is supported in part by the U.S. Department of Energy Office of Science.

The Dark Energy Survey is a collaboration of more than 400 scientists from 26 institutions in seven countries. Funding for the DES Projects has been provided by the U.S. Department of Energy, the U.S. National Science Foundation, the Ministry of Science and Education of Spain, the Science and Technology Facilities Council of the United Kingdom, the Higher Education Funding Council for England, the National Center for Supercomputing Applications at the University of Illinois at Urbana-Champaign, the Kavli Institute of Cosmological Physics at the University of Chicago, Funding Authority for Studies and Projects in Brazil, Carlos Chagas Filho Foundation for Research Support of the State of Rio de Janeiro, Brazilian National Council for Scientific and Technological Development and the Ministry of Science, Technology and Innovation, the German Research Foundation and the collaborating institutions in the Dark Energy Survey, the list of which can be found at www.darkenergysurvey.org/collaboration.

NSF’s NOIRLab (National Optical-Infrared Astronomy Research Laboratory), the US center for ground-based optical-infrared astronomy, operates the international Gemini Observatory (a facility of NSF, NRC–Canada, ANID–Chile, MCTIC–Brazil, MINCyT–Argentina and KASI–Republic of Korea), Kitt Peak National Observatory (KPNO), Cerro Tololo Inter-American Observatory (CTIO), the Community Science and Data Center (CSDC), and Vera C. Rubin Observatory. It is managed by the Association of Universities for Research in Astronomy (AURA) under a cooperative agreement with NSF and is headquartered in Tucson, Arizona. The astronomical community is honored to have the opportunity to conduct astronomical research on Iolkam Du’ag (Kitt Peak) in Arizona, on Maunakea in Hawaiʻi, and on Cerro Tololo and Cerro Pachón in Chile. We recognize and acknowledge the very significant cultural role and reverence that these sites have to the Tohono O’odham Nation, to the Native Hawaiian community, and to the local communities in Chile, respectively.

NCSA at the University of Illinois at Urbana-Champaign provides supercomputing and advanced digital resources for the nation’s science enterprise. At NCSA, University of Illinois faculty, staff, students, and collaborators from around the globe use advanced digital resources to address research grand challenges for the benefit of science and society. NCSA has been advancing one third of the Fortune 50® for more than 30 years by bringing industry, researchers, and students together to solve grand challenges at rapid speed and scale. For more information, please visit www.ncsa.illinois.edu.