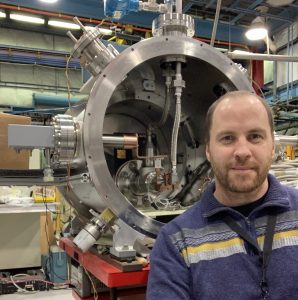 Fermilab scientist Juan Estrada stands in front of the OSCURA test vessel for the operation of CCDs in liquid nitrogen. Photo: Andrew Lathrop

The American Physical Society Division of Particles and Fields has given its 2020 Instrumentation Award to Juan Estrada, scientist at the U.S. Department of Energy’s Fermilab.

Estrada is recognized for his creation and development of novel applications for charge-coupled device, or CCD, technology that probes wide-ranging areas of particle physics including cosmology, dark matter sensing, neutrino detection and quantum imaging.

This sensitive technology has now evolved into the skipper CCD, which has the potential to exploit the quantum nature of light to capture images of objects with exceptional resolution using quantum technology to overcome classical limitation in imaging applications. The new detectors are also capable of exploring the low-energy neutrino sector and searching for low-mass dark matter candidates. 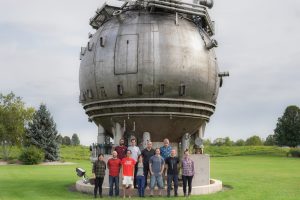 Members of the Fermilab CCD group pose in front of the bubble chamber. Juan Estrada is third from the left in the back row. Photo: Leticia Shaddix

Estrada completed his Ph.D. at the University of Rochester working at the DZero experiment in Fermilab. He is the recipient of the 2004 Tollestrup Award and the 2010 Presidential Early Career Award for Scientists and Engineers. Estrada started working with CCDs as a Wilson Fellow for the development of the Dark Energy Camera for the Dark Energy Survey. He then used this technology to start a low-mass dark matter search experiment named DAMIC and a low-energy neutrino experiment named CONNIE-LDRD, which currently involves more than 50 researchers around the world. Estrada is a collaborator of the SENSEI dark matter experiment and leads the OSCURA project, pushing the CCD technology to its full potential by developing a 28-gigapixel digital camera to search for low-mass dark matter.

Estrada will be honored in an award ceremony at the 2021 Coordinating Panel for Advanced Detectors Instrumentation Frontier Workshop.