Among the known elementary particles in nature, neutrinos are arguably the most mysterious. Proposed by Wolfgang Pauli in 1930, neutrinos eluded experimental observation until 1956, as they rarely interact with other particles. To this day physicists continue to learn more about these elusive particles.

One of the most exciting discoveries about neutrinos is their ability to change from one type of neutrino to another as they travel through space and matter. Physicists study these transitions, called neutrino oscillations, to learn about the properties of neutrinos and what role they may have played in the formation of the universe.

The latest measurement of neutrino oscillations with the NOvA experiment at the Department of Energy’s Fermilab brings us a step closer to understanding the properties and behavior of these identity-changing particles.

Thus far, physicists have discovered three types, or flavors, of neutrinos, which are the electron neutrino, muon neutrino and tau neutrino. Neutrino oscillations are the result of each neutrino flavor being a unique mixture of three neutrino masses. The three masses of a neutrino propagate as waves with different wavelengths, which leads to a neutrino becoming a mixture of flavors that changes continuously along the neutrino’s path. This characteristic enables, for example, a muon neutrino created in a particle decay to later interact as an electron neutrino. Antineutrinos, the antiparticles of neutrinos, are also mixtures of the same three neutrino masses and change flavor as well.

By measuring neutrino oscillations, physicists hope to answer open questions about neutrinos, including the ordering of the neutrino masses and whether neutrinos violate a symmetry called charge parity. The neutrino mass ordering — which neutrino mass is lightest, and which is heaviest? — is an important clue to the origins of neutrino mass. Charge parity symmetry, or CP for short, is a symmetry of nature where particles and antiparticles behave identically. Do neutrinos obey or disobey this symmetry? The discovery of neutrinos’ CP violation would be groundbreaking and could help explain the imbalance of matter and antimatter in the universe. 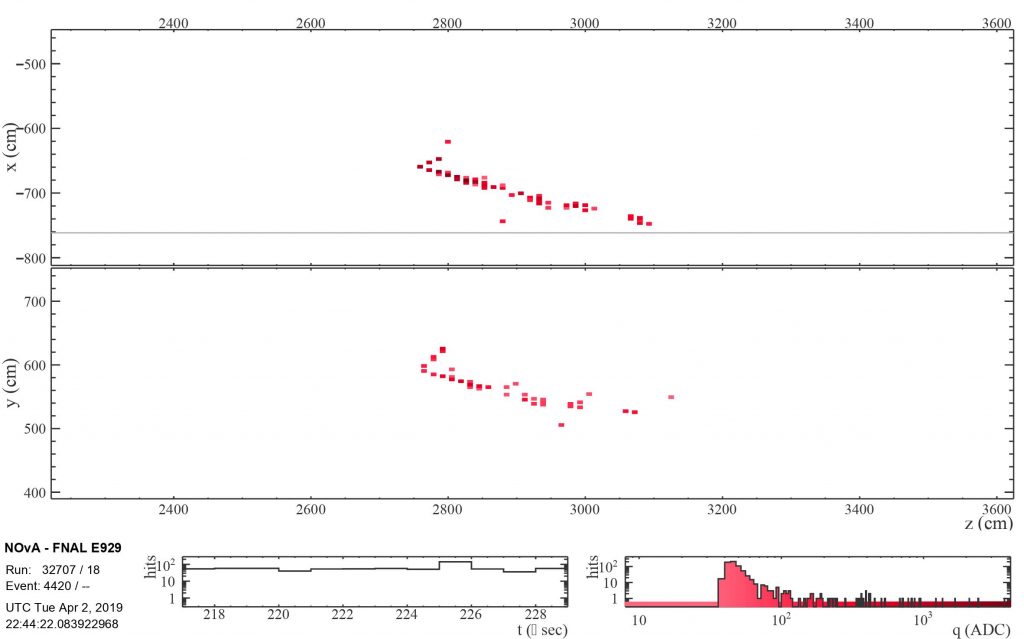 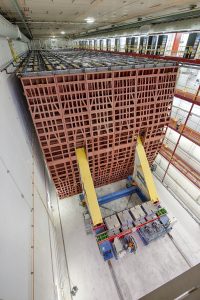 The NOvA experiment examines oscillations using the Fermilab particle accelerator complex. The NuMI beamline delivers a straight, high-intensity and high-purity beam of either muon neutrinos or muon antineutrinos for the experiment. NOvA scientists measure the rates at which muon neutrinos (or muon antineutrinos) disappear from the beam, and electron neutrinos (or electron antineutrinos) appear in the beam, due to oscillations. To accomplish these measurements, NOvA uses two detectors located along the path of the beam. The near detector is located at Fermilab near the beam source and observes interactions of the neutrinos before they’ve had the chance to oscillate. The far detector is located in northern Minnesota and observes interactions of the neutrinos after they’ve traveled through 810 kilometers of earth and had sufficient time to oscillate.

The NOvA collaboration now has released the result of its latest measurement of neutrino oscillations. It was obtained using data collected from Feb. 6, 2014, to March 20, 2020, which presents a 50% increase in muon neutrino beam data over NOvA’s previous result. The new result also reflects several improvements in the analysis of the data.

Based on this new data, NOvA did not observe a significant asymmetry in the rates of electron neutrino and electron antineutrino appearance. In particular, the result disfavors combinations of mass ordering and CP violation that combine to give a large asymmetry, but is consistent with combinations that give a small asymmetry consistent with zero. The collaboration continues to collect data and is working to further improve its measurement of neutrino oscillations. The collaboration so far has collected less than half of the planned data set.

The NOvA collaboration comprises more than 260 scientists and engineers from 49 institutions in eight countries. With the additional data and further analysis improvements, NOvA will bring physicists closer to understanding the identity-changing behavior of neutrinos.