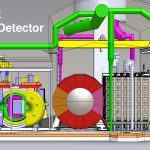 DUNE’s near detector, located at Fermilab, will take vital measurements of neutrino beam energy and composition before it reaches the experiment’s far detector in South Dakota. Its unmatched precision measurements will offer its own opportunities for the discovery of new physics. 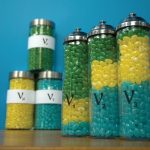 NOvA scientists have seen evidence that one of the three neutrino mass states might not include equal parts of muon and tau flavor, as previously thought. Scientists refer to this as “nonmaximal mixing,” and NOvA’s result is the first hint that this may be the case for the third mass state. Is the third neutrino mass state an equal mixture of muon and tau neutrinos? Preliminary results from NOvA, presented at Neutrino 2016, suggest it isn’t. NOvA announces its first cross section measurement, the probability than an electron neutrino interacts with the protons and neutrons inside the NOvA near detector. The measurement draws on the largest data set in the electron neutrino energy region from 1 GeV to 3 GeV. NOvA takes a first measurement of disappearances of muon type neutrinos as they oscillate away. Where NOvA would expect to see 201 muon neutrinos if there were no oscillations, they actually see only 33 — clear evidence of oscillations.