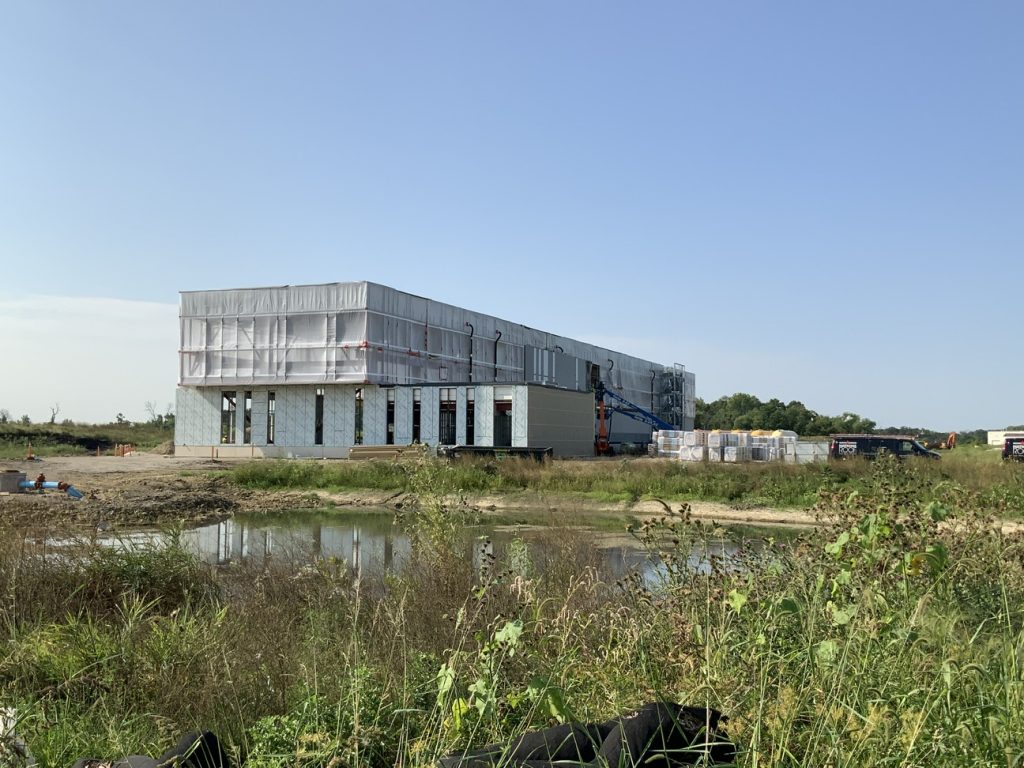 Construction on the PIP-II Cryogenic Plant Building began over a year ago in a greenfield site. By September 2021, much of the actual structure of the building is finished. Photo: Steve Dixon

Ground broke on the PIP-II Cryogenic Plant Building in July 2020 and construction began that August. This project is integral to PIP-II’s success, as the building will house cryogenic equipment that will cool the accelerator and mechanical, as well as electric utilities for the linac complex.

A little over a year into construction, the structure of the building is largely complete: In February, the steel was stood up. Since then, precast concrete wall panels and concrete floors have been installed with metal siding and windows underway. Mechanical, electrical, fire protection and other systems continue to be installed and likely will continue through the fall. The lab plans to take authorization for use for possession — which basically means lab employees can work in the building alongside the subcontractor — this fall to begin installing other building systems, including Wi-Fi.

Because construction began well into the pandemic, the lab’s Environment, Safety & Health section and the subcontractor, Barton Malow Builders, were able to navigate shifting needs to maintain safe working conditions and avoid delays, Steve Dixon, the manager for conventional facilities at PIP-II, said. Aside from normal construction issues that come with translating a design into a building, the project has been moving along without a hitch.

“For us, we were pretty fortunate to site PIP-II in an area of the lab that hadn’t been built on in the past. That was an intentional choice so that we had the opportunity to work from a greenfield site to minimize the impact to ongoing lab operations during the construction and commissioning of PIP-II. With the design of the buildings and the tunnels, we always tell our architects and engineering consultants that the exciting stuff goes into the tunnel and the boring stuff goes into the conventional facilities.  We try to make the construction as conventional as possible, which  makes it easier to build, operate and maintain. … The conventional facilities are pretty straightforward — it’s stuff we’ve been doing here at the lab for 50 years,” Dixon said. “The interesting part will be when we connect to the booster.”

That is years off. Architects and engineers are now designing the connection to the booster, which is one of the most technically challenging parts of the project.

“(It) will cross over not only the Main Ring and the utilities but also the helium lines that feed the Muon Campus and then tie into the booster which hasn’t seen the light of day since the early 1970s,” Dixon said.

It can be difficult to get a sense of scale for how big the linac that will power the world’s most intense neutrino beam will be. The ditch on the site is the approximate location and length of the future linac. (The ditch is actually a borrow pit. The site for the Cryogenic Plant Building had to be raised 3 feet, and that’s where the dirt came from.)

In the near-term, the next phase of sitework, with a bid to be awarded early fall, will involve raising the rest of the PIP-II site 3 feet and starting permanent roads. It will also restore the A-0 pond, which is original to the lab and has been silted in with time, so it can be used for PIP-II and other experiments as part of the lab’s sitewide industrial cooling water system.

As with steps as thrilling as the connection to the booster or mundane as shoring up the banks of a pond, PIP-II project construction affects many divisions across the lab.

Dixon’s goals for the construction and conventional facilities future of the project?

Still, excitement surrounds the project’s development. Benjamin Hansen is the head of Fermilab’s Cryogenics Operations Department and the eventual user of the cryoplant building. (His team will install the cryoplant itself in the building.)

“This building not only signifies the beginning of the PIP-II project, but also a new era of discovery at Fermilab,” Hansen said. “Just as the Central Helium Liquefier was to the Tevatron, so will this facility be to PIP-II and LBNF. In my first years at Fermilab, I admired those who designed, built and ran the CHL facility. It now excites me to be a part of this next-gen landmark cryogenic facility at the lab.”