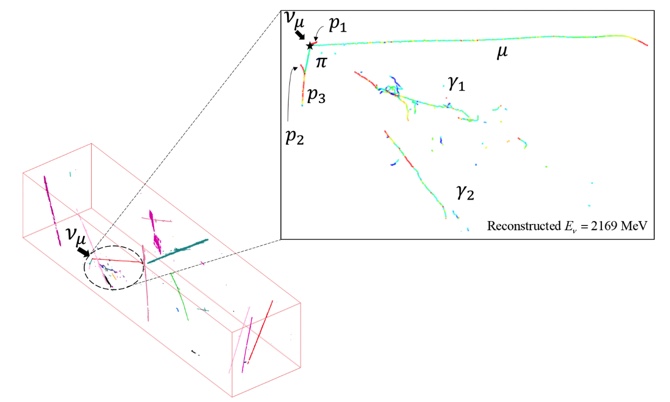 Neutrinos are tiny subatomic particles that are both famously elusive and tremendously abundant. While they endlessly bombard every inch of Earth’s surface at nearly the speed of light, neutrinos can travel through a lightyear’s worth of lead without ever disturbing a single atom. Understanding these mysterious particles could unlock some of the biggest secrets of the universe.

The MicroBooNE experiment, located at the U.S. Department of Energy’s (DOE) Fermi National Accelerator Laboratory, has been collecting data on neutrinos since 2015, partially as a testbed for DUNE, which is currently under construction. To identify elusive neutrinos, both experiments use a low-noise liquid-argon time projection chamber (LArTPC) — a sophisticated detector that captures neutrino signals as the particles pass through frigid liquid argon kept at negative 303 degrees Fahrenheit. MicroBooNE physicists have been refining LArTPC techniques for large-scale detectors at DUNE.

Now, a team effort led by scientists at DOE’s Brookhaven National Laboratory, in collaboration with researchers from Yale University and Louisiana State University, has further refined those techniques by measuring the neutrino-argon cross section. Their work published today in Physical Review Letters.

“The neutrino-argon cross section represents how argon nuclei respond to an incident neutrino, such as those in the neutrino beam produced by MicroBooNE or DUNE,” said Brookhaven Lab physicist Xin Qian, leader of Brookhaven’s MicroBooNE physics group. “Our ultimate goal is to study the properties of neutrinos, but first we need to better understand how neutrinos interact with the material in a detector, such as argon atoms.”

One of the most important neutrino properties that DUNE will investigate is how the particles oscillate between three distinct “flavors”: muon neutrino, tau neutrino, and electron neutrino. Scientists know that these oscillations depend on neutrinos’ energy, among other parameters, but that energy is very challenging to estimate. Not only are neutrino interactions extremely complex in nature, but there is also a large energy spread within every neutrino beam. Determining the detailed energy-dependent cross sections provides physicists with an essential piece of information to study neutrino oscillations.

“Once we know the cross section, we can reverse the calculation to determine the average neutrino energy, flavor, and oscillation properties from a large number of interactions,” said Brookhaven Lab postdoc Wenqiang Gu, who led the physics analysis.

To accomplish this, the team developed a new technique to extract the detailed energy-dependent cross section.

“Previous techniques measured the cross section as a function of variables that are easily reconstructed,” said London Cooper-Troendle, a graduate student from Yale University who is stationed at Brookhaven Lab through DOE’s Graduate Student Research Program. “For example, if you are studying a muon neutrino, you generally see a charged muon coming out of the particle interaction, and this charged muon has well-defined properties like its angle and energy. So, one can measure the cross section as a function of the muon angle or energy. But without a model that can accurately account for “missing energy,” a term we use to describe additional energy in the neutrino interactions that can’t be attributed to the reconstructed variables, this technique would require experiments to act conservatively.”

The research team led by Brookhaven sought to validate the neutrino energy reconstruction process with unprecedented precision, improving theoretical modeling of neutrino interactions as needed for DUNE. To do so, the team applied their expertise and lessons learned from previous work on the MicroBooNE experiment, such as their efforts in reconstructing interactions with different neutrino flavors.

“The neutrino-argon cross section results from this analysis are able to distinguish between different theoretical models for the first time,” Gu said.

While physicists expect DUNE to produce enhanced measurements of the cross section, the methods developed by the MicroBooNE collaboration provide a foundation for future analyses.  The current cross section measurement is already set to guide additional developments on theoretical models.

In the meantime, the MicroBooNE team will focus on further enhancing its measurement of the cross section. The current measurement was done in one dimension, but future research will tackle the value in multiple dimensions — that is, as a function of multiple variables — and explore more avenues of underlying physics.

This work was supported by the DOE Office of Science.

Brookhaven National Laboratory is supported by the Office of Science of the U.S. Department of Energy. The Office of Science is the single largest supporter of basic research in the physical sciences in the United States and is working to address some of the most pressing challenges of our time. For more information, please visit science.energy.gov