Particle physics changed forever on July 4, 2012. That was the day the two major physics experiments at CERN’s Large Hadron Collider, CMS and ATLAS, jointly announced the discovery of a particle that matched the properties of the Higgs boson—a particle theorized decades earlier. The discovery cemented the final piece in the Standard Model of particle physics.

In the decade since, physicists on CMS and ATLAS have studied the Higgs boson tenaciously, probing its properties and teasing out its secrets.

This week, on the 10-year anniversary of the Higgs discovery, CMS and ATLAS have released comprehensive new measurements of this particle in a special edition of the journal Nature. Both collaborations have measured properties of the Higgs boson more precisely than ever before, but neither has uncovered any surprises—yet. 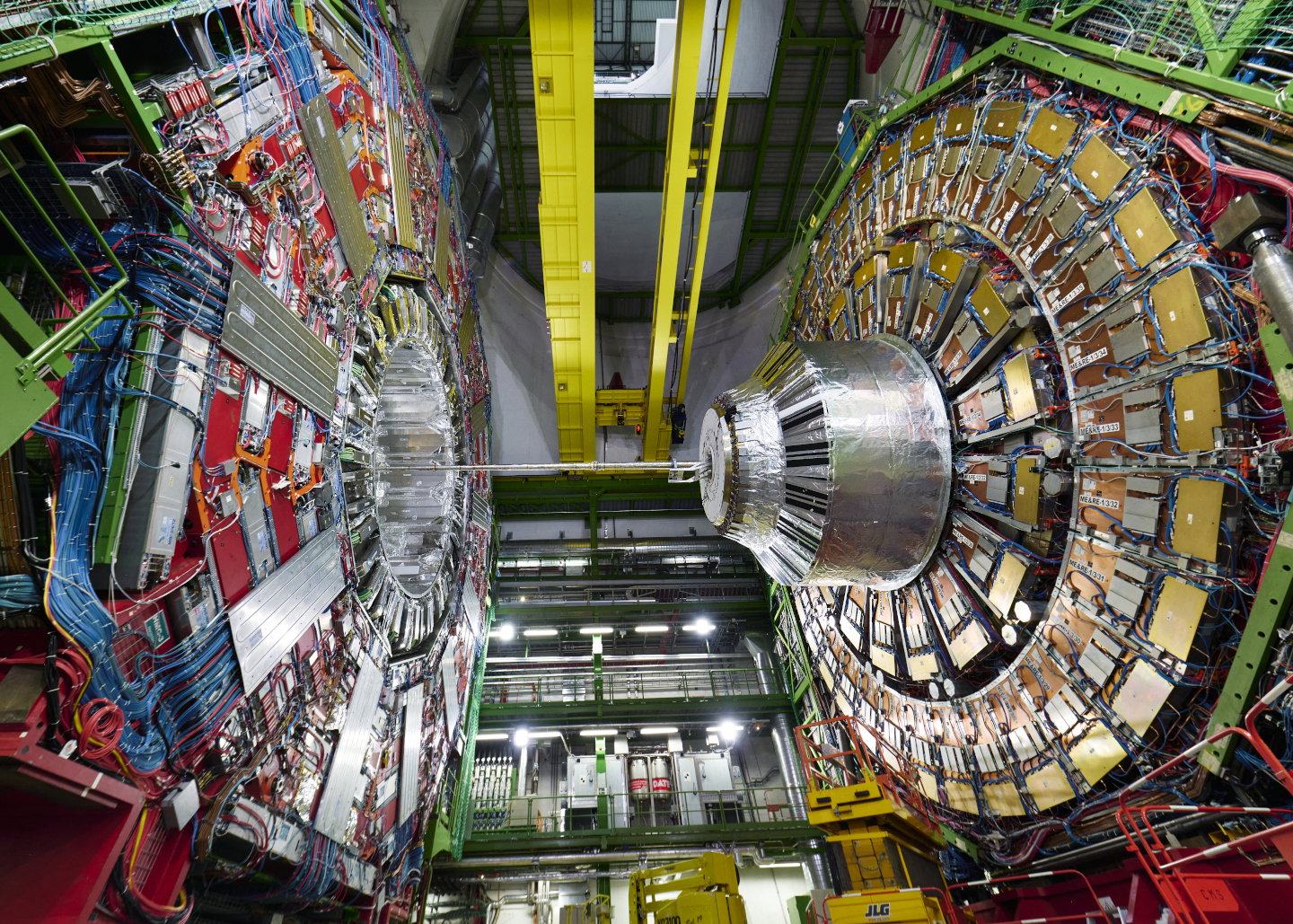 “The particle that was discovered [in 2012] looks more and more like the Standard Model Higgs boson,” says Kétévi Assamagan, an ATLAS physicist at the US Department of Energy’s Brookhaven National Laboratory who was convener for the experiment’s Higgs group from 2008-2010. “Nevertheless, there is room for new physics.”

“What’s really impressive is how well the experiments have measured these properties,” says Sally Dawson, a theorist at Brookhaven and co-author of the book The Higgs Hunter’s Guide. “We would have never guessed it … It’s truly phenomenal.”

“Now we know a whole lot about the Higgs, because particle physics predicted how the Higgs would be produced, how it would decay, the signatures that we would see. And it appears to be that it’s happening just the way it’s predicted.”

Liza Brost is an ATLAS physicist who has been studying the Higgs boson since its discovery—literally. (She started working at CERN on July 3, 2012.) “It’s really fun to have this new particle that we can analyze in detail and see what it is, how it behaves,” says Brost, who now works for Brookhaven.

Daniel Guerrero, a CMS researcher at DOE’s Fermi National Accelerator Laboratory, agrees: “After we discovered the Higgs boson, a completely new field of exploration opened for experiments at the LHC.”

In the last 10 years, the LHC completed its second run of data-taking, called Run 2. During this time, the collision energy was raised from 8 teraelectronvolts (TeV) to 13 TeV, increasing the rate of Higgs production and resulting in much more data for the experiments to collect and analyze.

For example, ATLAS estimates that about 9 million Higgs bosons were produced in the ATLAS detector during Run 2—30 times more than in 2012 (though they only analyze a fraction of that number).

“The Higgs boson has only gotten ‘bigger’ [in the last decade],” says Fermilab CMS researcher Nicholas Smith, speaking metaphorically (the Higgs boson mass remains approximately 125 GeV, now measured to a precision of 0.1%). “We’ve only gotten better and better at seeing it.”

Higgs bosons are created by accelerating beams of protons around the LHC’s 17-mile-circumference circular tunnel at close to the speed of light and colliding them. Two beams travel in opposite directions and collide at four points along the ring, including at the CMS and ATLAS detectors. The collisions trigger the formation of new particles, which sometimes interact and turn into a Higgs boson. 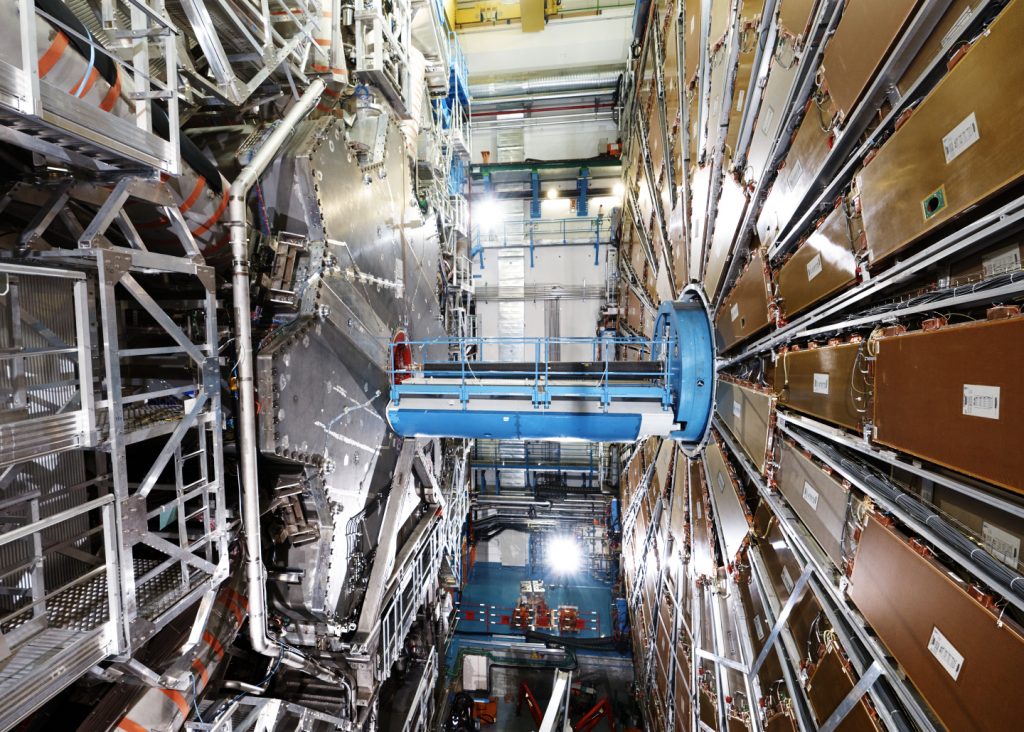 Studying the combinations of particles that can create a Higgs boson—called production channels or modes—and the particles into which it decays—called decay modes—gives physicists a better understanding of the particle.

The new CMS and ATLAS results were obtained by combining several separate analyses of Higgs boson production modes and their corresponding decay modes.

“The combination is basically taking the division of labor [by separate analyses] and then recombining it into something that is interpretable as one physics result,” says Smith, who is a co-convener of the CMS Higgs combination group. “The more [decay modes] you can cover, the more stringent limits you can place on the way the Higgs production behaves, and vice versa: the more production modes you look at, the more you can place stringent constraints on how it decays.”

Some of the key measurements include how the Higgs interacts with other particles. These interactions, or couplings, are part of the mechanism by which the Higgs gives mass to other fundamental particles.

All the new CMS and ATLAS measurements were consistent with predictions of the Standard Model within uncertainties. But that doesn’t mean there’s no new physics to be found, says Guerrero. “The effects of beyond-the-Standard-Model physics still can be hidden within those uncertainties, so that’s not a show-stopper,” he says. “Actually, we want to go further to see if, after we go to a higher precision, we can start to see deviations.”

Indeed, there is plenty of room for new phenomena beyond the Standard Model, as some of the Higgs boson’s key properties remain to be measured by both CMS and ATLAS. These include some of its rare decay modes and the coupling of the Higgs boson to itself.

This Higgs boson self-coupling is a phenomenon intensely studied by CMS and ATLAS, both of which set constraints on it in their new papers. It’s also related to Higgs pair production, an extremely rare interaction in which two Higgs bosons, instead of just one, are created in a single production channel; CMS and ATLAS have not observed it yet but established new limits on the probability of this process taking place.

Eventually observing Higgs self-coupling and Higgs pair production will allow physicists to better understand a property called the Higgs potential. This property of the field generated by the Higgs “has connections to the matter-antimatter asymmetry in the early universe and electroweak symmetry breaking—all of these huge questions that we usually don’t even get close to touching on in our line of work,” says Brost.

Now, though, physicists are looking forward to the data to be collected during LHC Run 3, which began July 5 and will last close to four years.  They all agree that the next steps for Higgs research require more data—and lots of it.

“The discovery of the Higgs allowed us to have a bit of direction,” says Assamagan. “In the process as well, we have come up with better techniques for doing analyses [and] we’ve improved our understanding of the detectors. So, a lot of progress has been made. And I think we are certainly in a better position now to discover new physics if it is there.”

This research was supported by the DOE Office of Science.

Brookhaven National Laboratory is supported by the Office of Science of the U.S. Department of Energy.