The Large Hadron Collider at CERN is back in action after a three-year scheduled technical shutdown period. Experts circulated beam in the powerful particle accelerator at the end of April, and Run 3 physics started in early July at the highest collision energy ever achieved.

The LHC experiments expect to collect petabytes of data to better understand nature at the smallest scale. Thousands of collaborators are testing the Standard Model of particle physics and hunting for new physics—things like supersymmetry, dark matter or undiscovered particles.

At the same time, researchers continue to prepare for the next iteration of the LHC.

Later this decade, scientists will begin operating with an upgraded accelerator for the High-Luminosity LHC, which will collide more protons with more luminosity than ever before. With it, scientists expect to see at least five to seven times as many collisions as they do now. Researchers are building technology to improve their detectors so that they can handle the increased luminosity. The detectors are running until the end of the 2030 and will cumulate a factor of 20 more data. 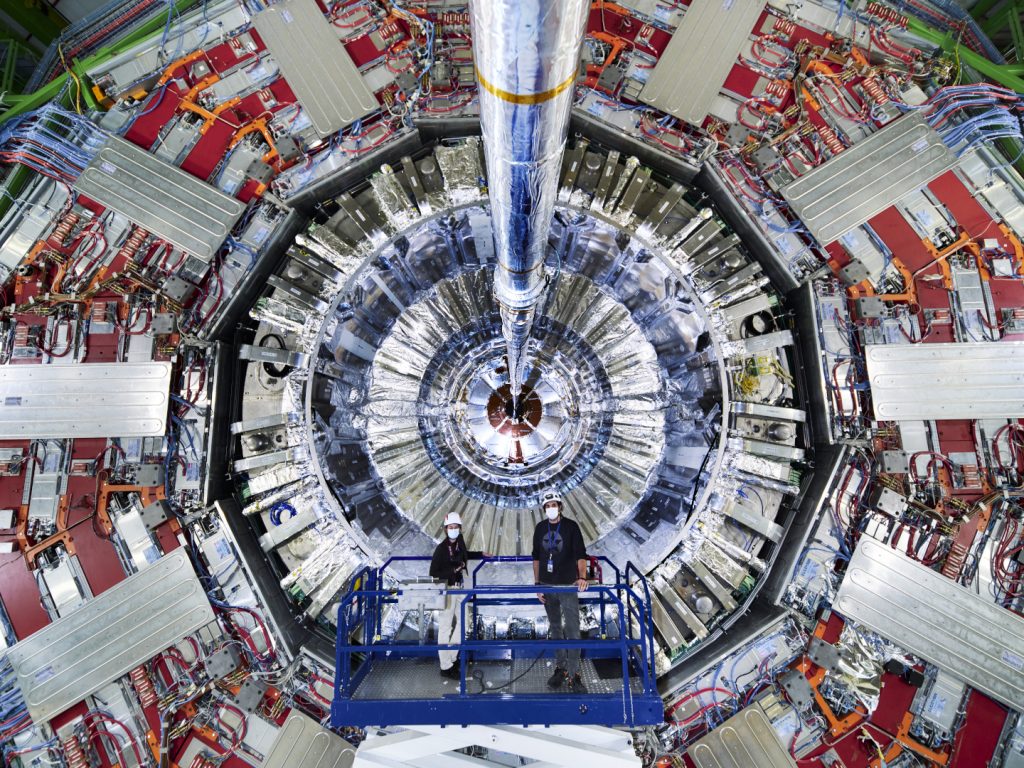 The CMS detector completed several upgrades during a three-year-long shutdown to prepare for the current physics run at the LHC. Additional upgrades planned for installation during the next long shutdown will prepare the experiment for the High-Luminosity LHC. Photo: Samuel Joseph Hertzog, CERN

The CMS experiment, which co-discovered the Higgs boson in 2012, along with the ATLAS experiment, is upgrading several systems. Hundreds of people from universities and labs around the world, including U.S. institutions funded by the U.S. Department of Energy and the National Science Foundation, are designing, building and installing the new detector components. These technologies aim to improve the existing experiment, which as of today has been in operation for more than a decade.

Experts are making upgrades in six key areas: the tracker system, timing detector, trigger and data acquisition system, endcap calorimeter, barrel calorimeter and muon system. These upgrades mean CMS scientists can precisely measure and better reconstruct how particles interact in the detector. Studying their behavior may lead to new insights and potential discoveries about how our universe works.

The CMS tracker charts a particle’s path through a magnetic field. It has two components: an inner pixel detector and an outer strip detector, both of which will be completely replaced. The tracker is the innermost area to be upgraded, closest to where the LHC’s protons collide. Because the HL-LHC will collide protons more quickly, particle paths will rapidly begin piling up. 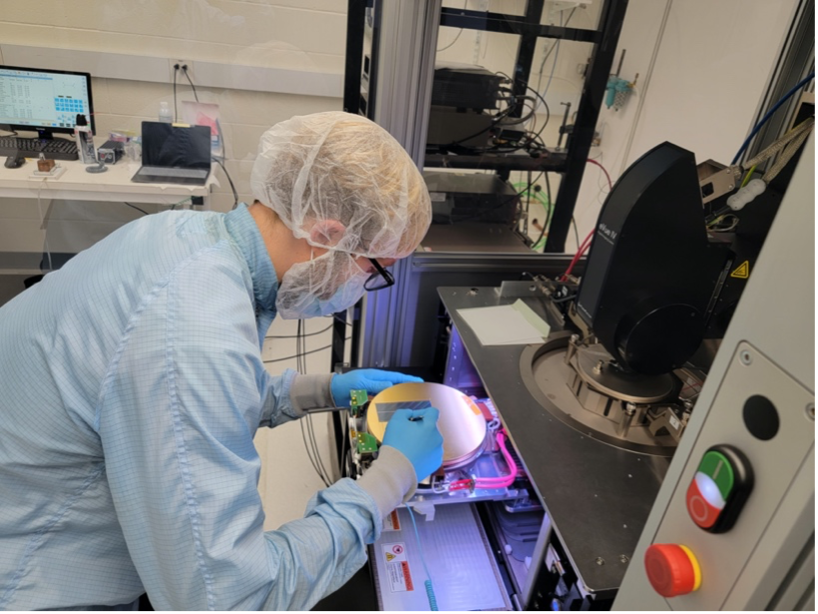 “The new pixel detector has a finer granularity,” said Anders Ryd, the principal investigator for the National Science Foundation-funded upgrades and a professor at Cornell University. “We need higher rates and higher granularity so that they can actually detect each particle. Otherwise, you have so many particles going through that you just see a smear.”

Collaborators will add eight discs in the forward region of the inner tracker, extending the pixel detector’s coverage. To handle the rapid-fire data, the team will assemble and add thousands of small modules to the outer tracker. They’ll be equipped with sensors and application-specific integrated circuit chips that can start filtering and reducing the data immediately, enabling the outer tracker to process information at a staggering rate of 40 million times per second.

CMS researchers are building a brand-new layer outside of the tracker called the Minimum Ionizing Particles, or MIP, timing detector. The timing detector mitigates pile-up, or a tangled mess of particle paths, by giving researchers information on when a particle entered the detector. Using unprecedented precision in measuring the time of arrival of particles will allow researchers to distinguish individual paths and reconstruct them in 4D.

“We are adding a detector layer that will give us a precision timing measurement of individual charged particles from LHC collisions along their path,” said Patricia McBride, a scientist at the DOE’s Fermi National Accelerator Laboratory who, elected by 3,000 physicists in the international CMS Collaboration to the role, will become head of the collaboration early this autumn. “This will give us information about the type of particle it is and which primary collision it came from. We will be able to use space and time information to identify the interesting tracks in the event.” 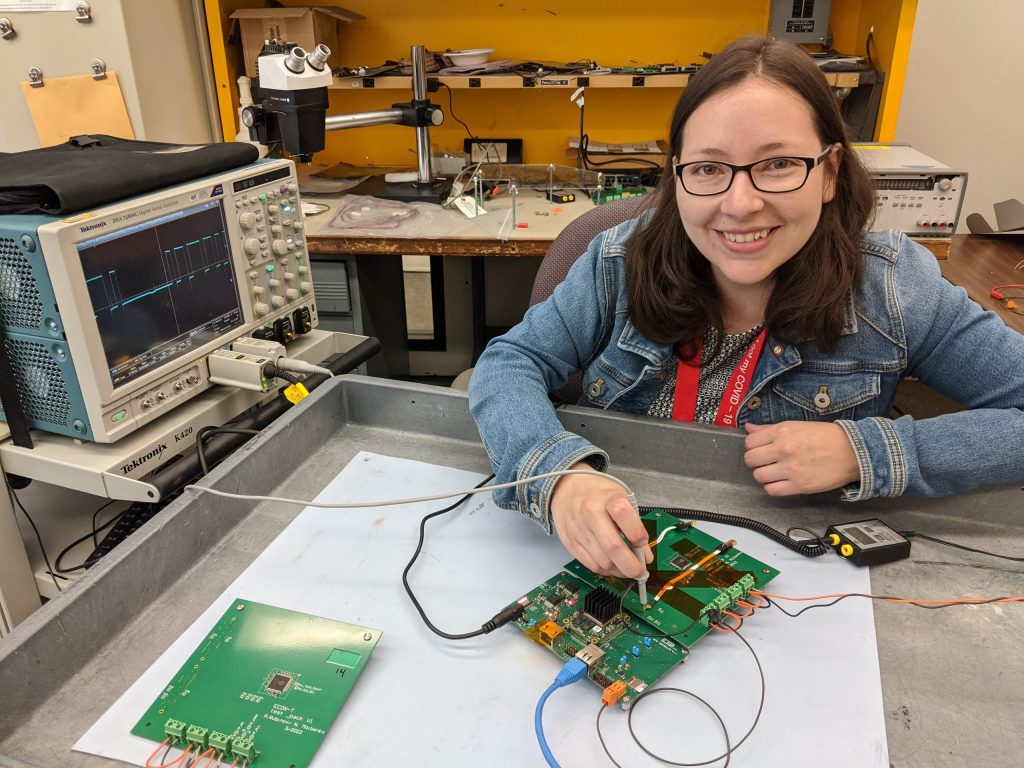 The timing detector is shaped like a barrel with two endcaps, and its airtight seal will prevent energy loss and keep out dust. The upgrade team is now designing and building modules, electronics and software for this timing detector.

The CMS trigger selects potentially interesting collision events and captures relevant data, discarding more scientifically benign events to keep the amount of data manageable. When operational, one of the new triggers will take in information from the upgraded outer tracker. Importantly, the new trigger will employ artificial intelligence and machine learning in its data acquisition of the large volume of data expected from LHC collisions.

The CMS experiment, which co-discovered the Higgs boson with the ATLAS experiment in 2012, is upgrading several systems. [Researchers] are designing and building the new detector components, and once installed, these technologies will improve the existing experiment, which has been in operation for more than a decade.

“We need to introduce some smartness into the event selection early on,” said Vaia Papadimitriou, who is the deputy manager of the upgrade project and a scientist at Fermilab, the host laboratory for the US-CMS collaboration. “This lets us reduce the amount of data we need to process and helps us eliminate background signals that would get in the way of what we’re actually trying to study.”

Upgrades to the data acquisition system will allow the team to collect data more quickly to keep up with the increased LHC collision rates.

CMS is equipped with barrel and endcap calorimeters, detectors that measure particles’ energies.

The endcap calorimeter flanks the inner detectors and analyzes the particle showers from collisions. The current endcap calorimeter will be completely replaced by a new, high-granularity calorimeter, or HGCal, the first of its kind to be used at a collider experiment. 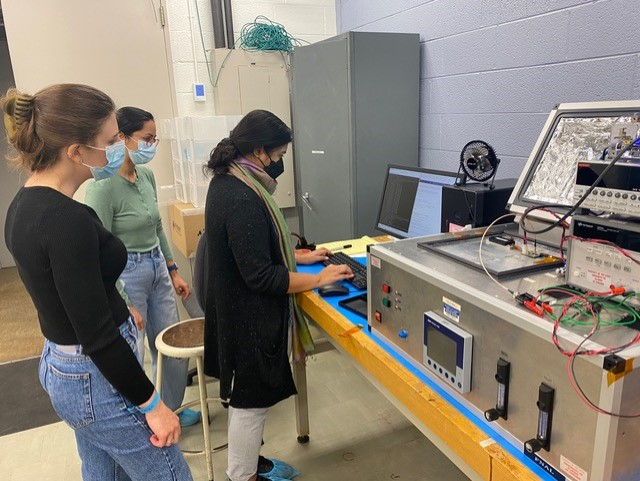 The detector will have excellent time resolution and incredibly fine spatial resolution, which allow precise reconstruction of the many particles produced. To build it, collaborators will assemble tens of thousands of modules with small silicon or scintillator sensors. The modules will form hundreds of cassettes, which incorporate the integrated circuits and electronics that can handle data directly on the detector and transmit it to the data acquisition system.

The team is also upgrading part of the barrel electromagnetic calorimeter. “We’ll replace what we call the ‘front-end electronics,’ the electronic system installed right there on the detector,” said Paolo Rumerio, the deputy upgrade coordinator and a physicist at the University of Alabama. The new system will be able to handle the increased flow of data.

“These calorimeters will provide a wealth of information that will enable CMS to reconstruct energy deposits, or showers, that come from different particles,” Rumerio said. “The energy and precise timing of each particle can be measured and used in the data analysis.”

Collecting information on muons is essential for CMS, as one would expect from its name: the Compact Muon Solenoid. The muons from particle collisions can travel fairly far without interacting, so this layer of the detector sits outside the calorimeters.

The new muon system will have upgraded electronics, better time resolution and an increased ability to detect muons coming off the beam at a wider range of angles. Several new electronic boards will handle data processing and readout. Collaborators are also improving the firmware and software used to control the electronics on these boards.

“The MREFC [Major Research Equipment and Facility Construction project] supported upgrades to the forward muon detectors include new electronics to support the higher data rates at the HL-LHC, as well as readout of new Gas Electron Multiplier detectors that will extend the muon detector coverage closer to the beam line,” Ryd said. “These upgrades will provide a significant enhancement of the CMS muon detection capabilities.”

Today, upgrades for the CMS detector are at different stages, but all will follow a similar path. After years of development and prototyping, the collaboration now moves to build or acquire the parts, begin fabricating system components at different U.S. laboratories, vet them with rigorous testing, and then deliver them to the experiments at CERN. Scientists will install the upgrade components during the LHC’s third long shutdown, currently scheduled to take place from 2026 to 2028.

Once the HL-LHC starts up, the increased data volume will help researchers search for rare physics processes and further investigate the Higgs boson. Researchers believe the Higgs provides the mechanism by which all other particles get their mass, but scientists still have a lot to learn about the universe by studying the particle to greater precision.