From Kelo, July 10, 2019: Fermilab’s Bonnie Fleming talks about neutrinos, the international, Fermilab-hosted DUNE and and LBNF in this 9-minute video on the research taking place one mile underground in Lead, South Dakota, at the Sanford Underground Research Facility.

From Rapid City Journal, July 12, 2019: Fermilab Director Nigel Lockyer was the guest for a free public speaker series held one day prior to Neutrino Day, a full day of neutrino-themed public activities in Lead. Lockyer spoke about is known as the Deep Underground Neutrino Experiment (DUNE), housed in the Long Baseline Neutrino Facility (LBNF), which will have its South Dakota component at the Sanford Underground Research Facility in the former Homestake mine. It’s a billion-dollar international collaboration, and it’s described as the largest particle physics project ever built in the United States.

Overlooking the Ross and Yates complex from Deadwood, South Dakota From KOTA TV, May 20, 2019: Fermilab’s Patrick Weber and Sanford Lab’s Mike Headley talk with the South Dakota news program about the Deep Underground Neutrino Experiment and the Long Baseline Neutrino Facility in this 3-minute segment.

Excavating for science in former gold mine

From Construction Equipment Guide, May 15, 2019: Fermilab’s Chris Mossey and Doug Pelletier talk about the international Deep Underground Neutrino Experiment, hosted by Fermilab, and the Long-Baseline Neutrino Facility, much of which will be built in the extensive maze of caverns at the former Homestake gold mine in South Dakota’s beautiful Black Hills. The site is being transformed into a laboratory designed to unlock the mysteries of some of the smallest particles in the universe, neutrinos.

DUNE: The neutrinos must flow

From DOE’s Direct Current podcast, May 7, 2019: This episode of Direct Current takes a subatomic sojourn into the international Deep Underground Neutrino Experiment, hosted by Fermilab, a massive international research project aiming to unlock the secrets of the neutrino with help from more than 175 institutions in over 30 countries. Join Fermilab’s Chris Mossey, Bonnie Fleming and Lia Merminga and DUNE collaborator Christos Touramanis on a tour from Fermilab to CERN to the bottom of a former gold mine a mile beneath the hills of South Dakota. 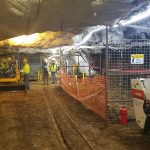 Excavating about 800,000 tons of rock a mile underground, bringing it to the surface, and then transporting it to its final resting place is a huge job and part of the LBNF/DUNE project. Creating the infrastructure for that job is a huge amount of work by itself and is going on right now. In this two-minute video, learn how scientists and engineers at universities and laboratories are working hand-in-hand with companies to design electronics, build hardware and develop computer programs for the Long-Baseline Neutrino Facility and the international Deep Underground Neutrino Experiment, hosted by Fermilab.

Why Fermilab is making a neutrino detector 800 miles long

From Discover, March 12, 2019: Fermilab, along with the Sanford Underground Research Facility in South Dakota, is starting a new project called the Deep Underground Neutrino Experiment, or DUNE. The goal is to track and study shadowy neutrinos like never before. Fermilab scientists Deborah Harris and Angela Fava discuss the experiment.

From Black Hills Pioneer, Jan. 18, 2019: South Dakota media reports on a public informational meeting that introduced the general contractor/construction manager for the Long-Baseline Neutrino Facility to the community.