In the air and underground, Brits honored in Rapid City

From STFC, Aug. 15, 2018: STFC has appointed Dave Newbold of the University of Bristol, who has been leading the data acquisition design for DUNE, as new director of its Particle Physics Department.

Why particle physicists are excited about this mysterious inconsistency

From Gizmodo, July 3, 2018: The Muon g-2 experiment is slated to release new data about the muon magnetic moment as early as next year, which will inform physicists as to whether there are strange, undiscovered particles out there — or not. 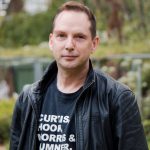 The UK physicist will co-lead the experiment for the next two years.