Batavia, Ill. – Officials of the U.S. Department of Energy’s Fermi National Accelerator Laboratory, near Chicago, and of the European Organization for Nuclear Research, CERN, in Geneva, announced today (Tuesday) the shipment of an advanced superconducting magnet from Fermilab to CERN. The first of a series of such magnets designed and built at Fermilab, the magnet is destined to play a key role in the operation of the Large Hadron Collider, a new particle accelerator now under construction at CERN, due to begin operating in 2007.

The departure of the 43-foot (13-meter) magnet marks the culmination of a decade-long Fermilab effort to design, develop, manufacture and test the next generation of focusing magnets for particle accelerators. In addition to nine U.S.-built magnets, Fermilab will also assemble and ship to CERN 18 similar but shorter magnets designed and built at KEK laboratory in Japan.

At a celebration at Fermilab marking the shipment of the first magnet from the laboratory to CERN, Dr. Raymond L. Orbach, Director of DOE’s Office of Science, praised Fermilab staff members for their achievement.

“I congratulate all of you at Fermilab for your dedication to excellence in design and engineering,” Orbach said. “These quadrupole focusing magnets are a triumph of technology, and are critical to the success of the LHC. From fabrication to winding to assembly, the Fermilab team has shown its capacity to produce large-scale magnets within microscopic tolerances. We are indebted to you for your commitment to on-time, on-budget delivery, and for your dedication to excellence. You are truly keeping the United States at the forefront of superconducting magnet technology.”

From Fermilab, the 19-ton magnet, encased in a bright-orange steel cylinder, will travel by road to Portsmouth, Virginia, to be loaded onto a ship bound for Antwerp, where it is scheduled to arrive on June 3. From Antwerp, it will travel by road to Geneva. Only one of the $1 million magnets will be shipped initially, to ensure that the shipping process does not affect the magnet’s performance.

“This first magnet from Fermilab is a tangible symbol of the important collaboration between our two leading accelerator laboratories,” said CERN Director General Dr. Robert Aymar. “The LHC is a major undertaking that has been the focus of collaboration between CERN and the U.S. and other countries around the world. Its success depends on making the most of the expertise and the advanced technologies that Fermilab and other collaborators can bring to the project.”

Accelerators, the principal instruments of high-energy physics, depend on advances in magnet technology to achieve the ever-higher energies required for discoveries in the field. Next-generation superconducting magnet systems built at three U.S. DOE national laboratories-Fermilab, Brookhaven National Laboratory and Lawrence Berkeley National Laboratory-represent a significant part of the $531 million total U.S. contribution to the LHC machine and detectors.

When the LHC begins operating, it will supplant Fermilab’s Tevatron as the world’s most powerful particle collider. Many U.S. physicists will join with other scientists from around the world in experiments using giant particle detectors at the LHC’s “interaction regions,” where counter-rotating beams of protons will collide at unprecedented energy. The proton beams will be kept on their 17-mile (27 km) circular path by some 1,600 magnets built by CERN.

The magnets from Fermilab and KEK will focus the proton beams at the interaction regions in order to maximize the number of collisions that occur within the detectors. Along with the energy of the accelerator, the number of particle collisions it creates per second determines its capability to produce discoveries. At nine Tesla, the superconducting magnets from Fermilab and KEK have the highest peak magnetic field of any focusing magnets ever built for a particle accelerator. The strength of the peak magnetic field is a critical factor in an accelerator’s ability to create particle collisions at high energies.

“These magnets are pushing superconducting technology to the limit,” said Lyn Evans, LHC project leader at CERN. “They are the culmination of a long collaboration between scientists and engineers at CERN and Fermilab and are key elements in getting the LHC to its design goal.”

“Congratulations on the achievement that the first quadrupole magnet completed at Fermilab is being shipped to CERN,” Yamamoto said. “As a partner of the LHC accelerator international collaboration project, we have been very pleased to collaborate with Fermilab and CERN in producing these extremely challenging superconducting magnets. We appreciate the excellent cooperative work with the team at Fermilab.”

Fermilab physicist James Strait, manager for the U.S. LHC magnet project, thanked those who designed and built the magnets for a formidable technical achievement, while reminding them of the project’s goal.

“These magnets will help the field of particle physics achieve great science at the LHC,” Strait said. “The science is the point of all that we do.”

Fermilab is a Department of Energy/Office of Science national laboratory, operated by Universities Research Association, Inc. 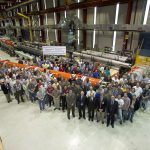 Members of Fermilab’s Technical Division gathered for a send-off celebration for an advanced superconducting magnet (orange) bound for the Large Hadron Collider at CERN. Credit: Fermilab 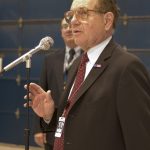 Dr. Raymond L. Orbach, director of the Department of Energy’s Office of Science, congratulated a Fermilab audience for keeping the U.S. at the forefront of superconducting magnet technology. Credit: Fermilab 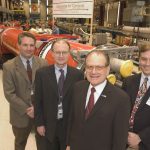 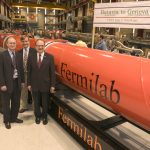 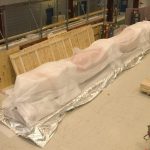 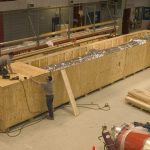 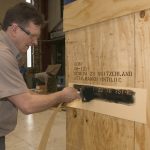 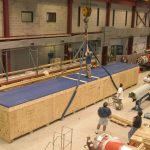 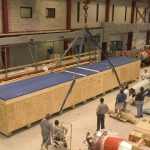 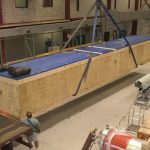 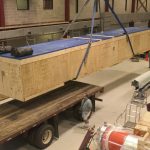 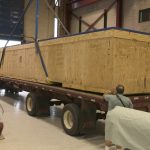