Batavia, Ill.—Scientists at the Department of Energy’s Fermi National Accelerator Laboratory today (June 9) announced new results that change the best estimate of the mass of the postulated Higgs boson from approximately 96 GeV/c2 to 117 GeV/c2. Compared to the previous value, the new value is in better agreement with direct searches – such as those conducted by CERN experiments – that excluded a mass below 114 GeV/c2. In a paper to appear in the June 10 issue of Nature magazine, physicists of Fermilab’s DZero experiment report on results obtained by applying a new analysis technique to data obtained from 1992 to 1996 during Collider Run I at the Fermilab Tevatron, the world’s highest-energy particle accelerator.

“These important results demonstrate how our scientists are applying new techniques to existing data, producing new estimates for the mass of the Higgs boson,” said Dr. Raymond L. Orbach, Director of the Department of Energy’s Office of Science, which funds Fermilab. “We eagerly await the next round of results from the vast quantities of data that are generated today at the Fermilab Tevatron.”

Particle physicists predict the existence of a heavy particle, the Higgs boson, which interacts with particles of matter to give them their characteristic masses. However, despite attempts at particle accelerator experiments to observe the Higgs, no one has yet detected its existence. While scientists have never observed the Higgs itself, they can predict its mass and other characteristics by making precise observations of known particles with which it presumably interacts. In particular, the masses of the top quark, discovered at Fermilab in 1995, and the W boson together constrain the mass of the Higgs. A precise measurement of the top quark mass not only lets experimenters home in on the energy level of particle collisions required to produce a Higgs, but also reveals whether the boson’s existence is consistent with experimental data. The indirect indication of the Higgs mass guides particle physicists in their ongoing hunt for direct observation and confirmation of the particle’s existence.

Scientists from nearly 40 U.S. universities and 40 foreign institutions contributed to this measurement. The DZero paper employs a novel technique for data analysis, based on ideas first developed in the 1980s by physicist Kunitaka Kondo of Japan’s Waseda University, a collaborator on Fermilab’s CDF experiment, and independently by Richard Dalitz and Gary Goldstein at Oxford.

“This analysis technique allows us to extract more information from each top-quark event that occurred in our detector,” said DZero cospokesperson John Womersley. “The result yields a greatly improved precision, of 5.3 GeV/c2, in the DZero top mass measurement. The new measurement is comparable to the precision of all previous top quark mass measurements put together. When this new result is combined with all other measurements from both the DZero and CDF experiments, the new world average for the top mass becomes 178.0 4.3 GeV/c2.”

The new value of the top quark mass shifts the best estimate of the Higgs mass from 96 to 117 GeV/c2, and the upper bound on the Higgs mass at the 95 percent confidence level rises from 219 to 251 GeV/c2.

The impact of the new value of the top mass goes beyond the Higgs boson, said DZero co-spokesperson Gerald C. Blazey, a physicist from Northern Illinois University.

Particle theorists predict a new class of heavier, “supersymmetric” partners for all of the known matter particles of the Standard Model, the theory of the fundamental particles and forces of nature. Searching for evidence of supersymmetry is among the key objectives for the CDF and DZero experiments during Run II at Fermilab’s Tevatron.

Fermilab Director Michael Witherell noted that DZero’s result does not end the story of precision measurements of the top quark mass.

“The two collider detectors, CDF and DZero, are recording large amounts of data in Run II,” Witherell said. “The CDF collaboration has recently reported preliminary new measurements of the top mass based on Run II data. The precision of the world average will improve further when their results are final. Over the next few years, both experiments will make increasingly precise measurements of the top quark mass.”

Fermilab is a national laboratory funded by the Office of Science of the U.S. Department of Energy, operated by Universities Research Association, Inc. For a list of DZero member institutions, please go to http://www-d0.fnal.gov/collaboration/ .

The top quark, discovered by the CDF and DZero collaborations at Fermilab in 1995, is the heaviest known elementary particle and the shortest-lived one. Top quarks decay in as little as 10-24 seconds. Any top quarks that were made in the very early universe decayed away billions of years ago. Fortunately, particle accelerators allow scientists to re-create such fleeting visitors to our world, by pumping sufficient amounts of energy into particle collisions to make top-antitop pairs. At present, the only accelerator with sufficient energy to do this is Fermilab’s Tevatron collider.

The Standard Model of Particles and Interactions describes very well the properties of and forces among quarks and leptons, but it contains parameters-such as particle masses-whose origins are still unknown. The values of many of these parameters are inter-related by quantum effects that couple particles to each other. In particular, the masses of the top quark and of the weak W boson together constrain the mass of the long hypothesized, but so far never observed, Higgs boson. A precise measurement of the top mass can therefore indicate where to look for the Higgs, and indeed whether the hypothesis of a Standard Model Higgs is consistent with experimental data at all. The Higgs particle is of extreme interest as it couples to all other particles, and according to the Standard Model these interactions are the source of quark and lepton masses – and hence the mass of all matter on earth. 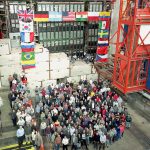 Scientists of the DZero collaboration in front of their detector. Scientists from nearly 40 U.S. universities and 40 foreign institutions contributed to the refined measurement of the top quark mass. 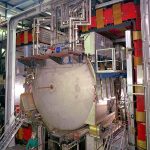 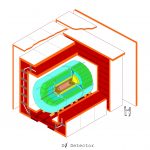 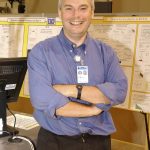 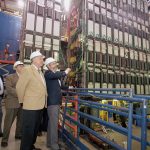 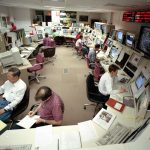 Scientists monitoring the recording of data in the DZero control room. 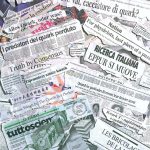 The discovery of the top quark at Fermilab by the CDF and DZero collaborations in 1995 created headlines in newspapers around the world. 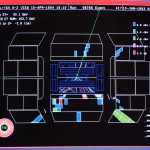 A screen shot of a top quark event recorded by the DZero experiment during Tevatron Collider Run I (1992-1996). 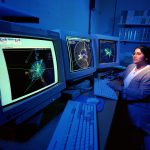 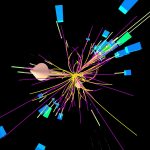 Visualization of a Run II collision that produced a top quark in 2002, recorded by the DZero experiment. The Run II data need further analysis and are not yet included in the June 9, 2004 announcement of a more precise value of the top quark mass. 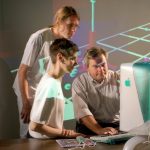