BATAVIA, Illinois-Scientists of the MINOS experiment at the Department of Energy’s Fermi National Accelerator laboratory today (June 14) announced the world’s most precise measurement to date of the parameters that govern antineutrino oscillations, the back-and-forth transformations of antineutrinos from one type to another. This result provides information about the difference in mass between different antineutrino types. The measurement showed an unexpected variance in the values for neutrinos and antineutrinos. This mass difference parameter, called Δm2 (“delta m squared”), is smaller by approximately 40 percent for neutrinos than for antineutrinos.

However, there is a still a five percent probability that Δm2 is actually the same for neutrinos and antineutrinos. With such a level of uncertainty, MINOS physicists need more data and analysis to know for certain if the variance is real.

Neutrinos and antineutrinos behave differently in many respects, but the MINOS results, presented today at the Neutrino 2010 conference in Athens, Greece, and in a seminar at Fermilab, are the first observation of a potential fundamental difference that established physical theory could not explain.

“Everything we know up to now about neutrinos would tell you that our measured mass difference parameters should be very similar for neutrinos and antineutrinos,” said MINOS co-spokesperson Rob Plunkett. “If this result holds up, it would signal a fundamentally new property of the neutrino-antineutrino system. The implications of this difference for the physics of the universe would be profound.”

The NUMI beam is capable of producing intense beams of either antineutrinos or neutrinos. This capability allowed the experimenters to measure the unexpected mass difference parameters. The measurement also relies on the unique characteristics of the MINOS detector, particularly its magnetic field, which allows the detector to separate the positively and negatively charged muons resulting from interactions of antineutrinos and neutrinos, respectively. MINOS scientists have also updated their measurement of the standard oscillation parameters for muon neutrinos, providing an extremely precise value of Δm2.

Muon antineutrinos are produced in a beam originating in Fermilab’s Main Injector. The antineutrinos’ extremely rare interactions with matter allow most of them to pass through the Earth unperturbed. A small number, however, interact in the MINOS detector, located 735 km away from Fermilab in Soudan, Minnesota. During their journey, which lasts 2.5 milliseconds, the particles oscillate in a process governed by a difference between their mass states.

The MINOS experiment involves more than 140 scientists, engineers, technical specialists and students from 30 institutions, including universities and national laboratories, in five countries: Brazil, Greece, Poland, the United Kingdom and the United States. Funding comes from: the Department of Energy and the National Science Foundation in the U.S., the Science and Technology Facilities Council in the U.K; the University of Minnesota in the U.S.; the University of Athens in Greece; and Brazil’s Foundation for Research Support of the State of São Paulo (FAPESP) and National Council of Scientific and Technological Development (CNPq). 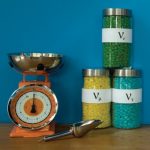 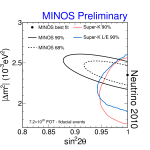 Neutrino oscillations depend on two parameters: the square of the neutrino mass difference, Δm2, and the mixing angle, sin22θ. MINOS results (shown in black), accumulated since 2005, yield the most precise known value of Δm2, namely Δm2 = 0.0024 ± 0.0001  eV2 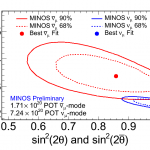