A view of the top of the ICARUS detector in place at INFN’s Gran Sasso National Laboratory in Italy. The 760-ton detector has been removed from Gran Sasso and shipped to CERN for upgrades, and will come to Fermilab in 2017 to become part of the laboratory’s short-baseline neutrino program. Photo: INFN

A group of scientists led by Nobel laureate Carlo Rubbia will transport the world’s largest liquid-argon neutrino detector across the Atlantic Ocean to its new home at the U.S. Department of Energy’s Fermi National Accelerator Laboratory.

The 760-ton, 65-foot-long detector took data for the ICARUS experiment at the Italian Institute for Nuclear Physics’ (INFN) Gran Sasso National Laboratory in Italy from 2010 to 2014, using a beam of neutrinos sent through the Earth from CERN. The detector is now being refurbished at CERN, where it is the first beneficiary of a new test facility for neutrino detectors.

When it arrives at Fermilab, the detector will become part of an on-site suite of three experiments dedicated to studying neutrinos, ghostly particles that are all around us but have given up few of their secrets.

All three detectors will be filled with liquid argon, which enables the use of state-of-the-art time projection technology, drawing charged particles created in neutrino interactions toward planes of fine wires that can capture a 3-D image of the tracks those particles leave. Each detector will contribute different yet complementary results to the hunt for a fourth type of neutrino.

“The liquid-argon time projection chamber is a new and very promising technology that we originally developed in the ICARUS collaboration from an initial table-top experiment all the way to a large neutrino detector,” Rubbia said. “It is expected that it will become the leading technology for large liquid-argon detectors, with its ability to record ionizing tracks with millimeter precision.”

Fermilab operates two powerful neutrino beams and is in the process of developing a third, making it the perfect place for the ICARUS detector to continue its scientific exploration. Scientists plan to transport the detector to the United States in 2017.

A planned sequence of three liquid-argon detectors will provide new insights into the three known types of neutrinos and seek a yet unseen fourth type, following hints from other experiments over the past two decades.

Many theories in particle physics predict the existence of a so-called “sterile” neutrino, which would behave differently from the three known types and, if it exists, could provide a route to understanding the mysterious dark matter that makes up 25 percent of the universe. Discovering this fourth type of neutrino would revolutionize physics, changing scientists’ picture of the universe and how it works.

“The arrival of ICARUS and the construction of this on-site research program is a lofty goal in itself,” said Fermilab Director Nigel Lockyer. “But it is also the first step forward in Fermilab’s plan to host a truly international neutrino facility, with the help of our partners from around the world. The future of neutrino research in the United States is bright.”

Fermilab’s proposed suite of experiments includes a new 260-ton Short Baseline Neutrino Detector (SBND), which will sit closest to the source of the particle beam. This detector is under construction by a team of scientists and engineers from universities and national laboratories in the United States and Europe.

Construction on the ICARUS and SBND buildings is scheduled to begin later this year, and the three experiments should all be operational by 2018. The three collaborations include scientists from 45 institutions in six countries.

The move of the ICARUS detector is a sterling example of cooperation between countries (and between three scientific collaborations) to achieve a global physics goal. The current European strategy for particle physics, adopted by the CERN Council, recommends that Europe play an active part in neutrino experiments in other parts of the world, rather than carry them out at CERN.

The U.S. particle physics community has adopted the P5 (Particle Physics Project Prioritization Panel) plan, which calls for a world-class long-distance neutrino facility to be built at Fermilab and operated by an international collaboration. Fermilab, CERN, INFN and many other international institutions are expected to partner in this endeavor.

Knowledge gained by operating the suite of three liquid-argon experiments will be important in the development of the DUNE experiment at the planned long-distance facility at Fermilab. DUNE will be the largest neutrino oscillation experiment ever built, sending particles 800 miles from Fermilab to a 40,000-ton liquid-argon detector at the Sanford Underground Research Facility in South Dakota. For more information, read this article from symmetry magazine.

“The journey of ICARUS from Italy to CERN to the U.S. is a great example of the global planning in particle physics,” said CERN Director General Rolf Heuer. “U.S. participation in the LHC and European participation in Fermilab’s neutrino program are integral parts of both European and U.S. strategies. I am pleased that CERN has been able to provide the glue that is allowing DUNE to get off the ground with the transport of ICARUS.”

“The ICARUS T600 is the only detector in the world with more than 600 tons of argon to have been successfully operated,” said INFN’s deputy president Antonio Masiero “ICARUS uses a high-precision, innovative technique to detect neutrinos artificially produced in an accelerator. This technique, developed at INFN and first successfully put into operation in the ICARUS experiment at the INFN’s Gran Sasso National Laboratory, will make in the new dedicated facility at Fermilab a fundamental contribution to neutrino research.”

The Italian Institute for Nuclear Physics (INFN) manages and supports theoretical and experimental research in the fields of subnuclear, nuclear, astroparticle physics in Italy under the supervision of the Ministry of Education, Universities and Research (MIUR).  INFN carries out research activities at four national laboratories, in Catania, Frascati, Legnaro and Gran Sasso and 20 divisions, based at university physics departments in different cities of Italy. www.infn.it and on Twitter @UffComINFN 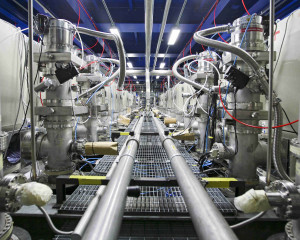 A view of the top of the ICARUS detector in place at INFN’s Gran Sasso National Laboratory in Italy. The 760-ton detector has been removed from Gran Sasso and shipped to CERN for upgrades. It will come to Fermilab in 2017 to become part of the laboratory’s short-baseline neutrino program. Photo: INFN 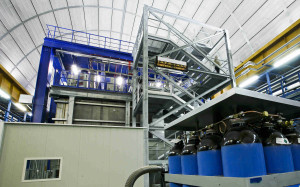 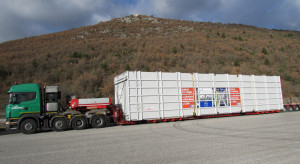 The 760-ton ICARUS detector on the road from Gran Sasso National Laboratory in Italy to CERN outside Geneva, Switzerland, in December 2014. The detector will be upgraded at CERN before being transported to Fermilab in 2017. Photo: INFN 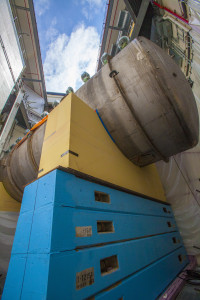 The 170-ton MicroBooNE liquid-argon neutrino detector, in place at Fermilab. The detector was designed to pin down anomalies in its predecessor experiment, MiniBooNE, and is expected to begin operation later this year. Photo: Fermilab 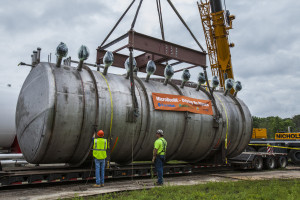 The MicroBooNE detector moves from its original location on the Fermilab site to its new building in the path of one of the laboratory’s powerful neutrino beams. MicroBooNE will serve as the “middle” detector in Fermilab’s on-site short-baseline suite of experiments and will join its two comrades, ICARUS and SBND, in the search for a theorized fourth neutrino. Photo: Fermilab 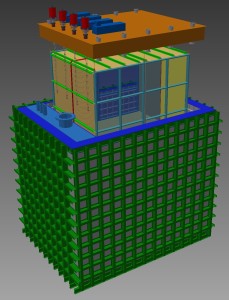 An artist’s rendering of the planned Short Baseline Near Detector (SBND), a 260-ton liquid-argon detector that will sit closest to the neutrino beam in Fermilab’s suite of on-site neutrino experiments. Construction on the buildings that will house ICARUS and SBND is expected to begin later this year. Image: Fermilab

This rendering shows the layout of the planned suite of short-baseline neutrino experiments at Fermilab. The neutrino beam will be directed westward, traveling through the near detector (SBND), the MicroBooNE detector and finally the far detector (ICARUS). These three experiments will work together to search for a theorized fourth neutrino, a discovery that would change scientists’ picture of the universe and how it works. Image: Fermilab