The largest collaborative undertaking yet to explore the relic light emitted by the infant universe has taken a step forward with the U.S. Department of Energy’s selection of Lawrence Berkeley National Laboratory, also known as Berkeley Lab, to lead the partnership of national labs, universities and other institutions that are joined in the effort to carry out the DOE roles and responsibilities.

This next-generation experiment, known as CMB-S4, or Cosmic Microwave Background Stage 4, is being planned to become a joint DOE and National Science Foundation project. CMB-S4 will unite several existing collaborations to survey the microwave sky in unprecedented detail for seven years with 500,000 ultrasensitive detectors. These detectors will be placed on telescopes in two of our planet’s prime places for viewing deep space: the South Pole and the high Chilean desert. The project is intended to unlock many secrets in cosmology, fundamental physics, astrophysics and astronomy.

The Department of Energy’s Fermilab, a partner on CMB-S4, expects to work on the development of the detectors and cameras, which have to operate at 0.1 kelvins — a fraction of a degree above absolute zero — to achieve the requisite sensitivity. 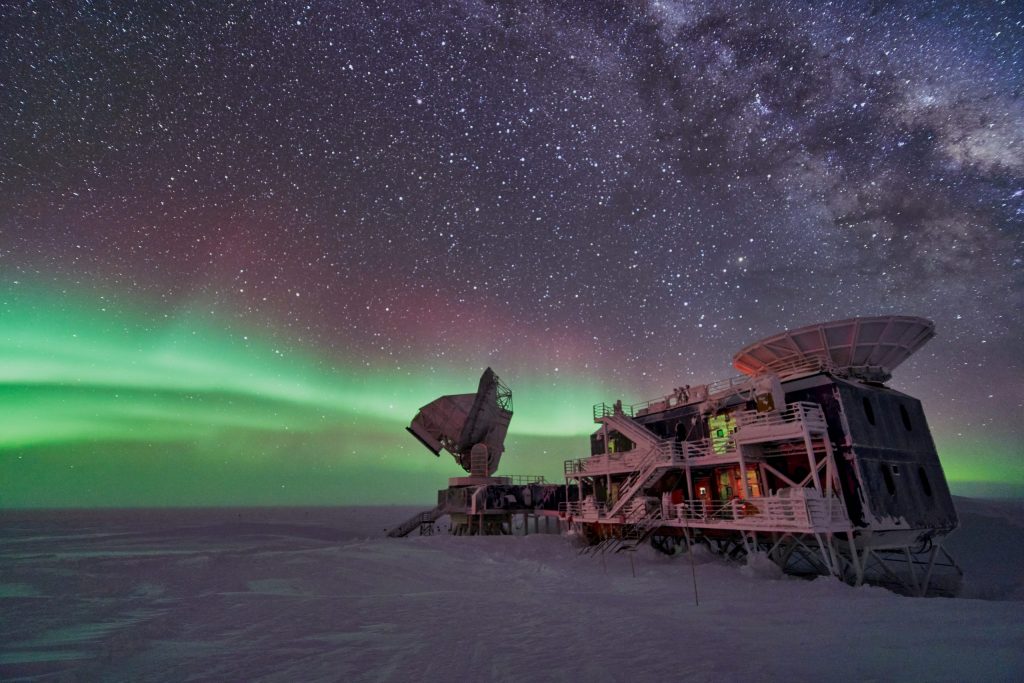 CMB-S4 will use telescopes installed at the South Pole to measure variations in the temperature and polarization of microwave light across most of the sky to probe for ripples in space-time. Shown here is the South Pole Telescope. Photo: Brad Benson, University of Chicago, Fermilab

Combining a mix of large and small telescopes at both sites, CMB-S4 will be the first experiment to access the entire scope of ground-based CMB science. It will measure ever-so-slight variations in the temperature and polarization, or directionality, of microwave light across most of the sky to probe for ripples in space-time associated with a rapid expansion at the start of the universe and determine the energy scale of that expansion, known as inflation.

CMB-S4 will also help to measure the mass of the neutrino; map the distribution of matter in the universe; shed new light on mysterious dark matter, which makes up most of the universe’s matter but hasn’t yet been directly observed, and dark energy, which is driving an accelerating expansion of the universe; and aid in the detection and study of powerful space phenomena such as gamma-ray bursts and jet-emitting blazars.

The South Pole Telescope scans the sky as the southern lights, or aurora australis, form green patterns in this 2018 video clip. The CMB-S4 project will feature new telescopes around this site of current experiments at the South Pole, and also in Chile’s high desert. Credit: Robert Schwarz/University of Minnesota

On Sept. 1, DOE Office of Science Director Chris Fall authorized the selection of Berkeley Lab as the lead laboratory for the DOE roles and responsibilities on CMB-S4, with Fermilab, Argonne National Laboratory and SLAC National Accelerator Laboratory serving as partner labs, and with university partners. The CMB-S4 collaboration now numbers 236 members at 93 institutions in 14 countries and 21 U.S. states.

“We are delighted with the lead lab decision and excited that DOE has taken this important step,” said Brenna Flaugher, lead scientist at Fermilab for the CMB-S4 experiment. “We look forward to tackling the challenge of measuring the universe at unprecedented sensitivity and revealing the secrets of its earliest moments.” 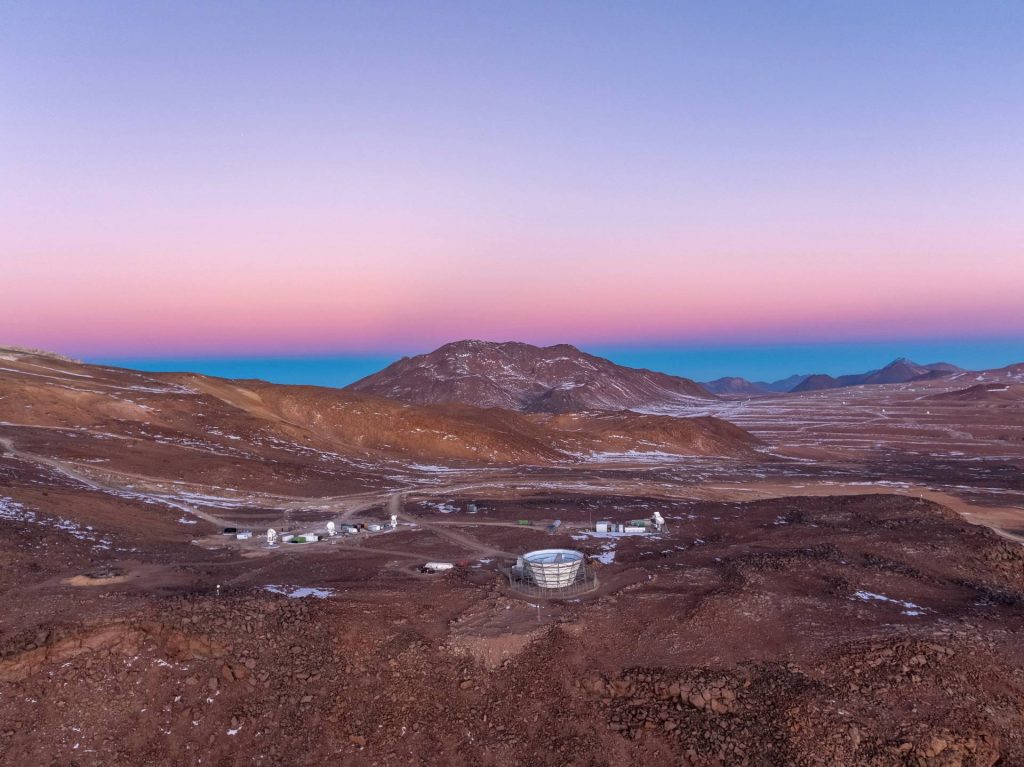 This shows the Atacama Desert site where some of the telescopes for the CMB-S4 experiment will be built. Photo: Debra Kellner/Simons Foundation

The project passed its first DOE milestone, known as Critical Decision 0 or CD-0, on July 26, 2019. It has been endorsed by the 2014 report of the Particle Physics Project Prioritization Panel, known as P5, which helps to set the future direction of particle physics-related research. The project also was recommended in the National Academy of Sciences Strategic Vision for Antarctic Science in 2015 and by the Astronomy and Astrophysics Advisory Committee in 2017.

The National Science Foundation has been key to the development of CMB-S4, which builds on NSF’s existing program of university-led, ground-based CMB experiments. Four of these experiments – the Atacama Cosmology Telescope and POLARBEAR/Simons Array in Chile, and the South Pole Telescope and BICEP/Keck at the South Pole – helped to start CMB-S4 in 2013, and the design of CMB-S4 relies heavily on technologies developed and deployed by these teams and others. NSF is also helping to plan its possible future role with a grant awarded to the University of Chicago.

CMB-S4 builds on decades of experience with ground-based, satellite and balloon-based experiments.

What’s unique about CMB-S4 is not the technology itself – the detector technology has already been proven in earlier experiments, for example – but the scale at which the technology will be deployed, including the sheer number of detectors, scale of the detector readout systems, number of telescopes and volume of data to be processed. 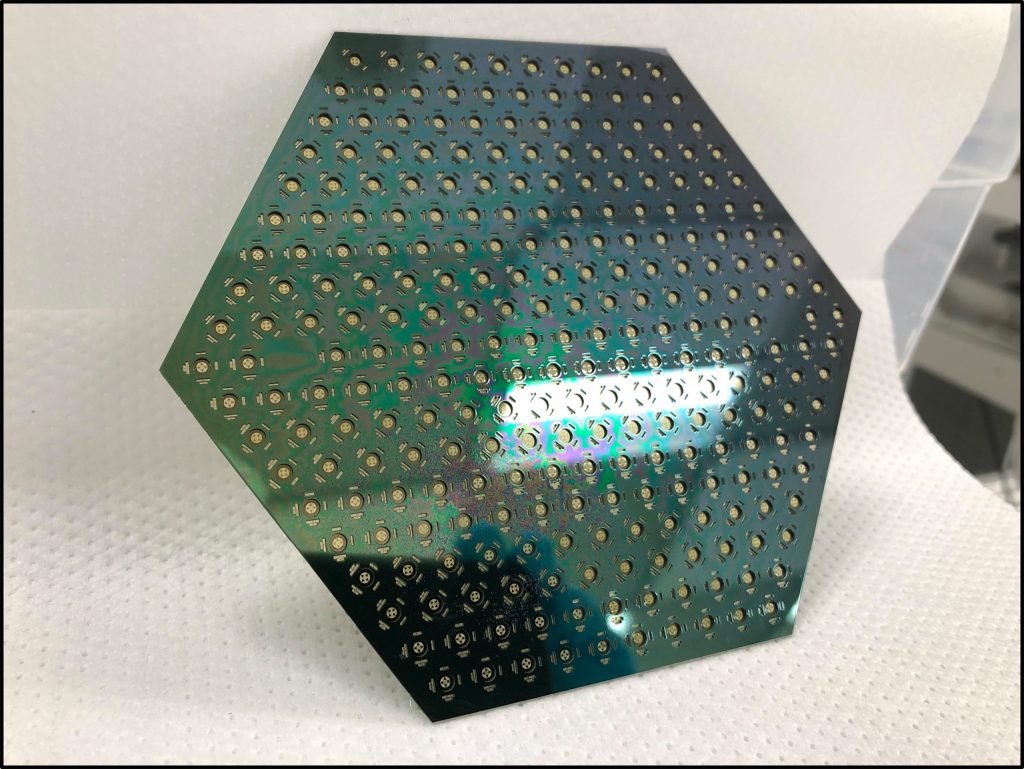 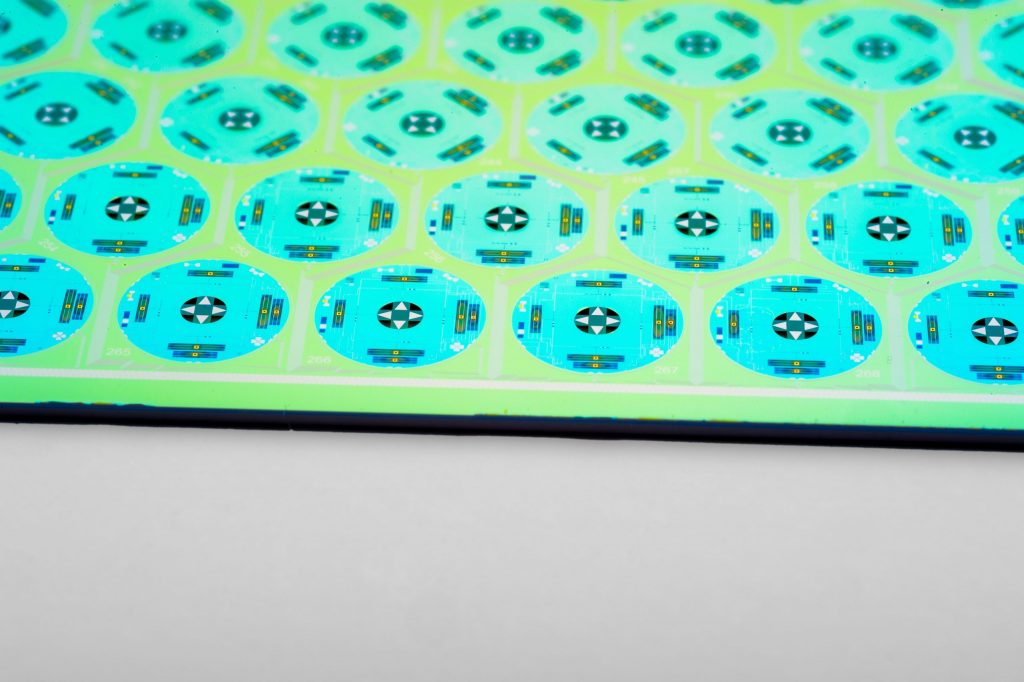 CMB-S4, which will exceed the capabilities of earlier generations of experiments by 10 times, will have the combined viewing power of three large telescopes and 18 small telescopes. The major technology challenge for CMB-S4 is in its scale. While previous generations of instruments have used tens of thousands of detectors, the entire CMB-S4 project will require half a million.

The data-management challenges will be substantial, too, as these huge arrays of detectors are expected to produce 1,000 times more data than the previous generation of experiments. A major hardware focus for the project will be the construction of new telescopes and the mass-fabrication of the detectors. The current detector design, adapted from current experiments, will feature silicon wafers that each contain 1,000 detectors.

Participation in the CMB-S4 project is a highlight of the Fermilab cosmic strategic plan. The CMB-S4 detector module development and testing is expected to capitalize on years of experience and facilities at Fermilab, which have been integral to other cosmic projects.

“Fermilab has been a pioneer in developing cosmic surveys, such as the Sloan Digital Sky Survey, the Dark Energy Survey and, most recently, the South Pole Telescope SPT-3G Survey,” said Fermilab and University of Chicago scientist Brad Benson. “Now with CMB-S4, we’re excited to be planning contributions to the R&D and construction of new cameras, which will be an order of magnitude more sensitive than anything previously built.”

The project is hoping to deploy its first telescope in 2027, to be fully operational at all telescopes within a couple of years, and to run through 2035.

Next steps include preparing a project office at Berkeley Lab, getting ready for the next DOE milestone, known as Critical Decision 1, working toward becoming an NSF project and working across the community to bring in the best expertise and capabilities.

“We congratulate Berkeley Lab and look forward to working with them on this next-generation effort to study nature at its most magnificent scales, coming closer to solving the mysteries of matter, energy, space and time,” said Fermilab Director Nigel Lockyer.

Astrophysics research at Fermilab is supported by the DOE Office of Science.

DOE’s Office of Science is the single largest supporter of basic research in the physical sciences in the United States and is working to address some of the most pressing challenges of our time. For more information, visit energy.gov/science.