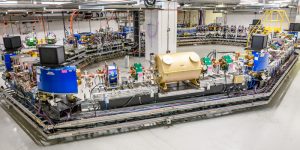 Consider two high-energy electrons circulating in a particle storage ring, such as the Integrable Optics Test Accelerator at Fermilab. As it was discovered in 1947, when high-energy electrons are forced to travel in a curved path, they emit light, known as synchrotron radiation. If we record the detected synchrotron light intensity at every revolution in a storage ring, we will observe slight fluctuations of its magnitude from turn to turn because the relative positions of the two electrons change.

The IOTA storage ring, hosted by the Department of Energy’s Fermilab, can store a billion electrons. Just as in the two-electron case, the turn-to-turn fluctuations of the billion electrons’ radiation intensity still exist, and for the same reasons. The fluctuations are very small, below 0.1% (root-mean-square). Still, our research group was able to measure them, and we showed that this information can be used to gain insights into the electron beam’s properties, such as its dimensions and divergence — a measure of spread in directions of motion of the electrons in the beam.

For instance, we think this method could measure transverse beam sizes on the order of 10 microns in the Advanced Photon Source Upgrade at Argonne National Laboratory, by using the turn-to-turn fluctuations in the X-ray synchrotron light. This is an important step in making tighter electron beams, which in turn generate brighter X-rays. With brighter X-rays, researchers will be able to accelerate research in chemistry, materials science and medicine, including COVID-19 research.

Research at IOTA is supported by the DOE Office of Science.