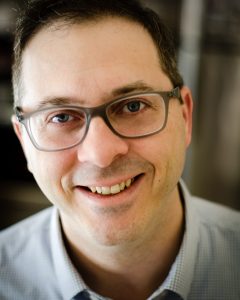 Fermilab scientist Matt Toups will serve as co-spokesperson for the MicroBooNE experiment as it continues to investigate particles called neutrinos. Photo: Renee Toups

The MicroBooNE neutrino experiment is entering a new phase of life. With data collection recently completed, the collaboration is now focused on analysis, peering into six years’ worth of data to better understand neutrinos. As of Feb. 7, 2022, the collaboration also has new leadership. Matt Toups, a scientist at the U.S. Department of Energy’s Fermi National Accelerator Laboratory, was elected co-spokesperson. He joined Justin Evans of the University of Manchester in leading the experiment.

“We’re entering this phase in the collaboration where we’re hitting our stride in terms of reconstructing the data, making sense out of it and putting out premiere physics results that the community can really sink their teeth into,” said Toups. “I think it’s our golden era of physics results.”

Toups earned his doctorate from Columbia University, focusing on the behavior of neutrinos from nuclear reactors in the Double Chooz experiment for his thesis. He began working on MicroBooNE electronics in 2012 as a postdoctoral researcher at MIT and then co-led commissioning of the MicroBooNE detector. Toups has served as physics analysis coordinator since the experiment came online in 2015. He currently also works on the Short-Baseline Near Detector and Deep Underground Neutrino Experiment, international projects hosted by Fermilab that will build off of MicroBooNE’s discoveries and expertise in liquid-argon detector technology.

“Matt has an incredible wealth of experience in MicroBooNE — in how the detector works, in the physics that we are doing, and in working with the world-class people who make up our collaboration,” Evans said. “He has provided leadership for many years and was central to the first searches for a low-energy excess that we recently published. I am delighted to be working with him now as co-spokesperson, and we have an exciting time ahead of us.”

MicroBooNE is a 170-ton neutrino detector about the size of an American school bus, and one of three experiments in Fermilab’s short-baseline (or short-distance) neutrino program. MicroBooNE’s cutting-edge technology can record incredibly precise 3D images of neutrino events, providing detailed information about how these elusive particles interact. Almost 200 collaborators from 37 institutions in five countries work on the experiment.

Using about half of their data, collaborators released their first flagship neutrino results in fall 2021. The exciting result all but ruled out two of the most likely causes for an experimental anomaly that has remained unexplained for two decades. As researchers continue to analyze their data, they’ll turn to different and sometimes more exotic options, including physics that lies beyond the current best theory: the Standard Model.

“There’s a lot of interesting physics topics to explore,” Toups said, noting that in recent workshops, MicroBooNE researchers collaborated with theorists on possible explanations for their data and generated new ideas for physics analyses. “It’s great to see the creativity of the collaboration coming through with new ideas, and it’s exciting because they’re things our detector is capable of probing.”

In addition to physics analysis, the MicroBooNE team will also be working on how best to integrate the knowledge and tools developed for their experiment into the neutrino detectors coming online over the next few years. Together, the suite of experiments will better understand one of the strangest particles and the fundamental nature of our universe.

“We’re seeing the power of liquid-argon detectors to do this sophisticated physics and search for new phenomena and answer some of these lingering questions,” Toups said. “It’s exhilarating.”