Scientists build complex machines to better understand the particles that make up our universe — and sometimes, they use materials you might not expect. One example? The upcoming Mu2e experiment at the U.S. Department of Energy’s Fermi National Accelerator Laboratory will incorporate thousands of straws made by a drinking straw company.

But these aren’t your average soda straws. Mu2e will use special mylar straws, with walls thinner than a human hair, to search for a never-before-seen transformation of subatomic particles called muons. 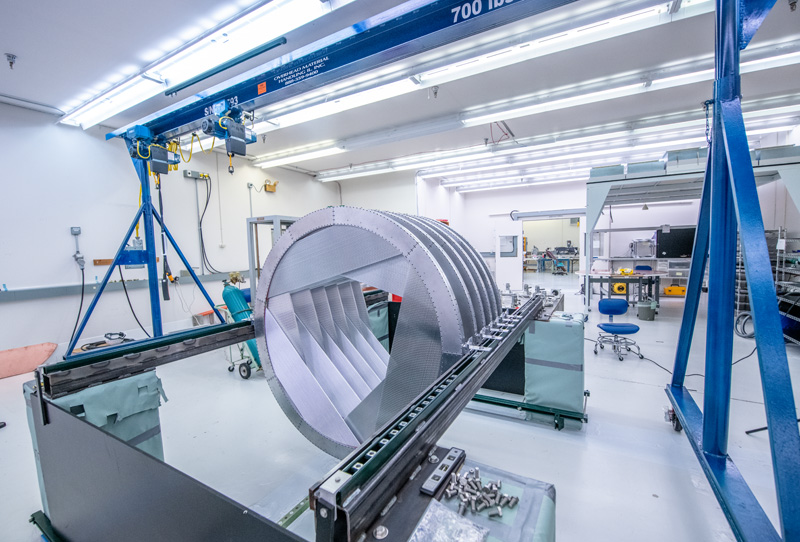 Several of the Mu2e tracker planes, featuring thin mylar straws, are assembled in a cleanroom at Fermilab. The full tracker will contain 21,600 straws to measure the paths, energies and momentums of electrons with high precision. Photo: Ryan Postel, Fermilab

Teams from this international collaboration are currently constructing the Mu2e particle detector at Fermilab and aim to start taking physics data by 2026. If they find the rare, sought-after signal, it will be a sign of new physics beyond the tried and tested Standard Model of particle physics. It would help pave the way to answering open questions about the fundamental nature of elementary particles and forces that physicists have had for many years.

“All of our measurements come up for what seems like a zillion decimal points right on target with the Standard Model,” said Karen Byrum, a scientist at Argonne National Laboratory and the electronics integration team leader for Mu2e. “But we know there’s stuff out there we can’t explain, like results from the Muon g-2 experiment at Fermilab and the LHCb experiment at CERN.”

A clue may lie in one peculiar family of particles.

From muon to electron

Particles come in different categories. Perhaps the most familiar are the leptons, whose smallest member, the electron, swirls around in atoms and powers electronic devices.

Charged leptons come in three types that all behave similarly but have different masses: the electron, muon and tau. Why there are these three types of particles is one of the big open questions in particle physics. While the electron is well studied, its 200-times heavier cousin, the muon, holds many mysteries that could help scientists understand fundamental aspects of matter. 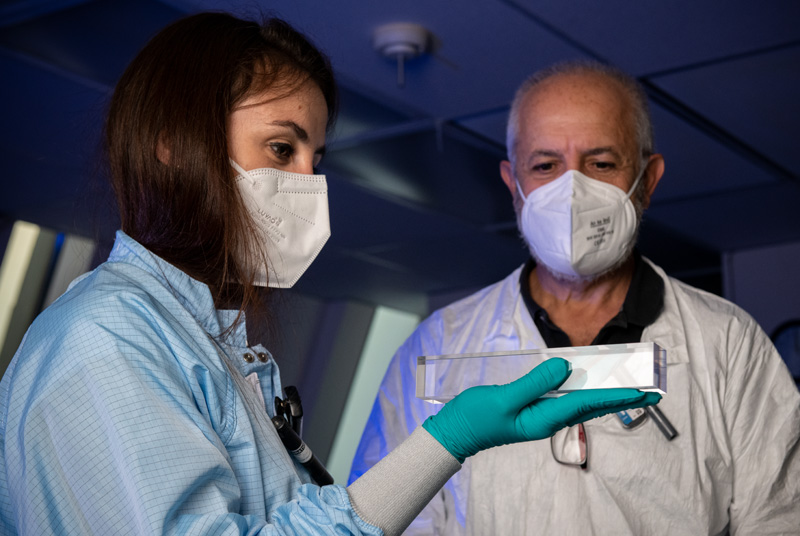 Eleonora Diociaiuti and Stefano Miscetti examine one of the 1,348 cesium iodide crystals that will be installed in the Mu2e calorimeter. It will measure the energy of electrons emerging from muon decays with high precision. Photo: Ryan Postel, Fermilab

There are also three flavors of electrically neutral leptons called neutrinos: electron neutrinos, muon neutrinos and tau neutrinos. Scientists have spotted neutrinos changing directly from one type into another. So follows a natural question: Can the charged members of the lepton family shapeshift in the same way?

Mu2e (pronounced mew-to-e) will try to find out by searching for a muon changing directly into an electron without emitting any other particles, the muon-to-electron conversion that gives the experiment its name. Such a transformation would have a distinct signature that an extremely precise detector could see. But it has never been observed so far. The 200-plus Mu2e collaborators from 38 institutions in 6 countries aim to change that.

“I am looking forward to the physics run and the breakthrough physics that is Mu2e. It has the potential to open new doors to highly sought after problems of the Standard Model, like lepton hierarchy, neutrino masses and even dark matter.” — Mete Yucel, Fermilab

An electron in a haystack

Researchers expect that, if the muon-to-electron phenomenon occurs, it will happen extremely rarely — less often than once in every 1,000 billion muons. The Mu2e experiment will thus need to create and sift through an incredible number of particles.

The experiment will create a beam of 10 billion muons per second that travel toward an aluminum target. Aluminum nuclei will capture the muons, pulling them into orbit as though they were electrons in a standard atom. Once the muons are trapped around the nuclei of the aluminum atoms, researchers can look for the transformation. 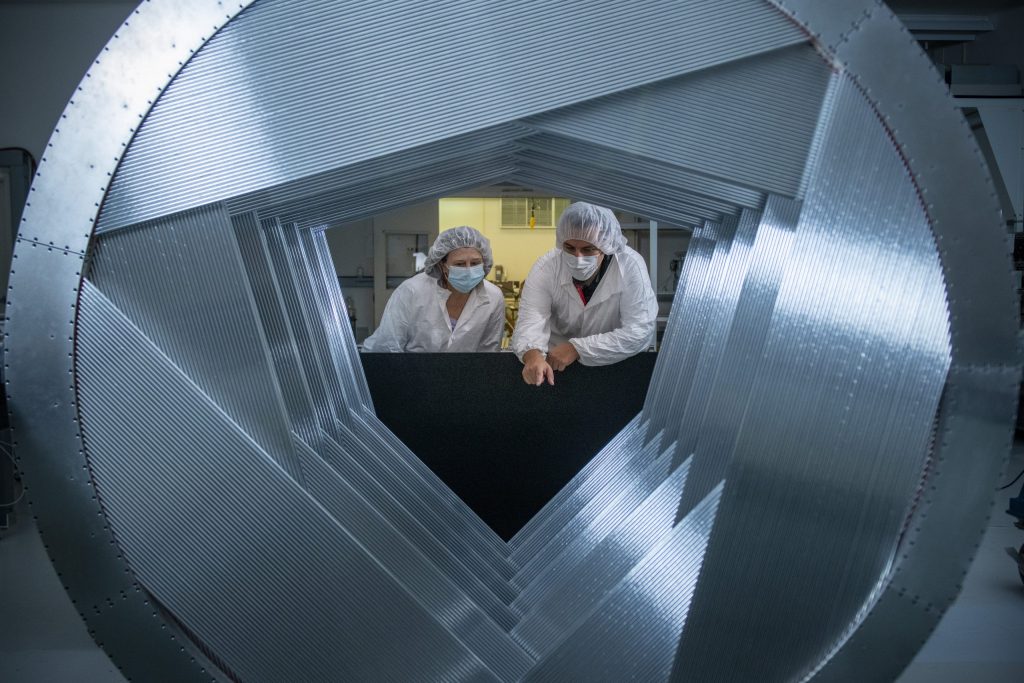 If a muon decays normally, into an electron and two neutrinos, all three particles will carry away some of the energy. But if a muon transforms only into an electron, the electron will emerge with all of the muon’s energy: 105 MeV, or megaelectronvolts. This is the distinct signature that will tell physicists they’ve found something new.

“It’s not a signal where you’re going to have thousands of events; it’s going to be a handful,” Byrum said. “You have to understand your detector and the backgrounds that can mimic your signal.”

Measuring with extreme precision the energy of each electron observed is crucial to eliminating particle events that could create a false signal.

Capturing and distinguishing precise amounts of energy from billions of electrons takes a powerful detector. Mu2e experimenters are currently building two of the primary components for the detector that will live inside the experiment’s magnet: the tracker and the calorimeter.

The tracker will measure the paths, energies and momenta of the electrons, using 21,600 mylar straws specially made by the drinking straw company using a modified winding technique. Once laser-cut to length, the straws were arranged in a series of 36 circular planes, each one nearly as tall as a person. Every slender straw contains a gold-plated tungsten wire to collect and transmit information as electrons pass through.

“It is incredibly challenging to build such a big, precise and delicate device,” said Mete Yucel, a Fermilab scientist leading the plane assembly for the tracker. The equipment is built through collaboration with several universities and Berkeley Lab and is currently under construction at Fermilab. The tracker should be complete in 2024, though one of the planes has already been running for more than a year. Using this “Vertical Slice Test Plane,” researchers have reconstructed tracks from muons produced in the atmosphere and tested some of the software and algorithms Mu2e will use. 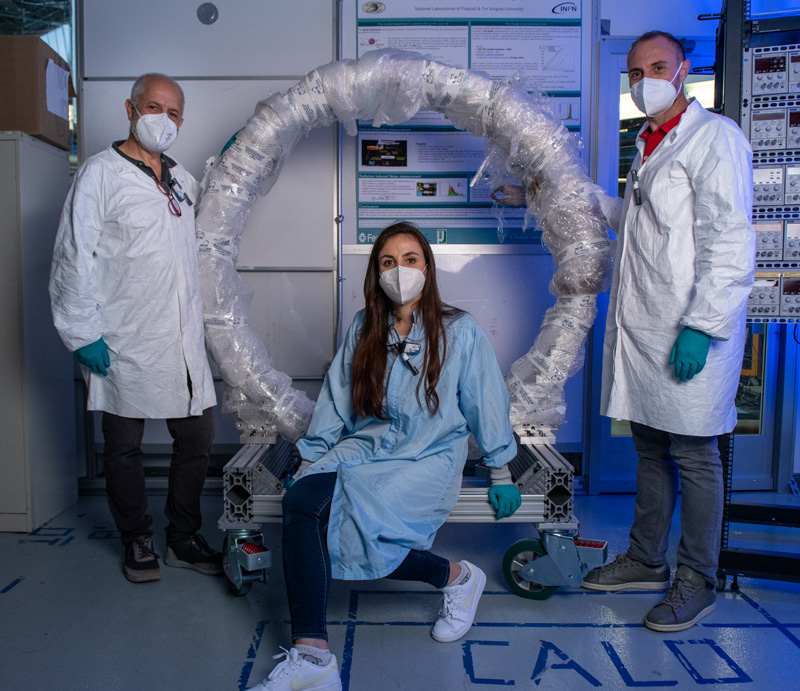 Despite the tracker’s precision, measuring the energy from the electrons requires more information, which is where the calorimeter comes in.

Over the last few months, the Mu2e team has finished assembling the calorimeter’s skeleton: two one-ton disks, each with slots to contain 674 pure cesium iodide crystals that will be installed this summer. When an electron hits a crystal, it creates a shower and emits photons. Custom-built light detectors capture the information and tell scientists how much energy was deposited.

“When an electron arrives in the tracker, it moves in the magnetic field almost unmodified. When it arrives at the calorimeter, it’s absorbed,” said Stefano Miscetti, a scientist from the Italian National Institute of Nuclear Physics who is leading the calorimeter construction. “We can measure the timing at which the particle arrives very, very precisely. The calorimeter team is very eager to see the startup of this very exciting and challenging experiment.”

Researchers have successfully tested and measured the calorimeter’s timing to within 100 picoseconds, or 100 trillionths of a second. By combining data from the tracker and calorimeter, scientists will have more than enough data points to know if they’re seeing something spectacular.

While work on the detector continues, collaborators are making progress on the rest of experiment. The first section, where the muons will be produced, is nearly complete. Over the past year, researchers have also tested the magnets that will make up the middle section known as the transport solenoid, which will guide the muons to the aluminum target. Lastly, work is ongoing on the cosmic ray veto system, the third essential detector component that will sit outside the magnet and catch any false signals created by muons from space.

When the Mu2e experiment comes online, it will be 10,000 times more sensitive than any other experiment that has looked for the muon-to-electron conversion. Scientists expect to begin installation and commissioning of the experiment in 2024 and to be ready to take data in 2026.

“It has the potential to open new doors to highly sought-after problems of the Standard Model, like lepton hierarchy, neutrino masses and even dark matter,” Yucel said. “I am looking forward to the physics run and the breakthrough physics that is Mu2e.”