Last month the Holometer, Fermilab experiment E-990, reached its design luminosity, building up more than 1 kilowatt of infrared laser power stored in a 40-meter-long Michelson interferometer. This light intensity corresponds to more than 1022 (10 billion trillion) photons per second hitting the interferometer optics. It also allows scientists to measure the optics’ positions to a resolution 1,000 times smaller than the size of a proton.

With this device, physicists hope to discover a new, exotic source of noise: “holographic noise,” which causes a fundamental and unavoidable jitter in the positions of all objects. The new noise, which would limit the ultimate precision of measurements of any type, is believed to originate from a newly postulated law of nature that constrains the maximum information storage capacity of space-time.

Starting with a 1-watt commercial laser beam, researchers achieve the power build-up to 1 kilowatt by recycling the laser’s photons, or particles of light, reflecting used photons back into the interferometer and in effect using each photon 1,000 times before discarding it. The resulting recycled light beam hits the optics with the intensity equivalent of 200,000 laser pointers, causing them to glow brightly (see photograph above) due to scattered light. 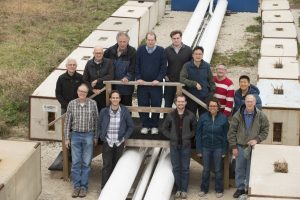 When the optics shake due to ground noise, or perhaps due to holographic noise, the motion creates a difference in the path lengths of the two “arms” of the L-shaped interferometer. When the light traveling in the two arms is combined at a common point (at a device called a beam splitter), the changes in the path lengths result in a detectable flickering of the combined beam. The motion of the optics can then be inferred from the flickering.

The Holometer collaboration recently commissioned the devices for measuring this flickering. The high-speed, low-noise detection electronics have demonstrated sensitivity to the extremely subtle holographic noise signal at power levels 100 times lower than typical electronic noise. A characteristic feature of the predicted signal is that its frequency spectrum extends up to megahertz radio frequencies. By focusing on this high-frequency band, the experiment can easily avoid the dominant lower frequency seismic and acoustic noise backgrounds. In fact, the only background noise sources observed so far by the detection system are broadcasts from local AM radio stations, which can be easily identified (using the latest boom box technology) and rejected.

The Holometer team is now addressing the final challenge of shielding the detectors from stray scattered light and is gearing up to begin the holographic noise hunt in earnest. Full speed ahead!

Aaron Chou is a Fermilab scientist on the Holometer experiment.