Topping off a telescope with new tools to explore dark energy

From Berkeley Lab, Dec. 4, 2018: Key components of Berkeley Lab’s Dark Energy Spectroscopic Instrument are installed after months of planning, prep work. A team at Fermilab built the corrector, hexapod, and other top-end support structures. The structures are designed to align the lenses with an accuracy of tens of microns (millionths of a meter) – similar to the width of the thinnest human hair. 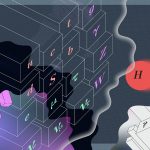 Our best model of particle physics explains only about 5 percent of the universe.

The scientific theories battling to explain the universe

Mapping the universe in 3-D: Fermilab contributes to the Dark Energy Spectroscopic Instrument 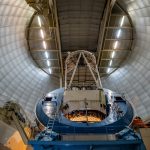 DESI, an instrument to help scientists get to the bottom of the dark energy mystery, is getting a little help from Fermilab.

From UQ News, Aug. 1, 2018: A scientist from the Dark Energy Survey, which is hosted by Fermilab, is selected for the television program Australian Survivor.

From FAPESP’s Pesquisa, March 2018: International researchers are constantly looking for lighter particles in the hope of finding dark matter, including at the DarkSide-50 experiment, CDMS and the Dark Energy Survey.

With FACCTS on its side, Fermilab strengthens trans-Atlantic research 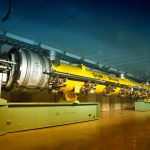 The France Chicago Center program has been successful at Fermilab, where the organization has supported four collaborations with a total of almost $60,000.

From Universe Today, June 20, 2018: A Fermilab astrophysicist recently conducted a study that indicates how a sufficiently advanced civilization might be able to harvest Local Group stars and prevent them from expanding outward.

From Russia Today, June 21, 2018: Expansion of the universe, thought to be further accelerated by dark energy, is flinging matter apart, while galaxies are being pushed away from each other. This is a challenge alien technologies will have to deal with in order for them to survive, Fermilab’s Dan Hooper writes in a new study.

To combat an expanding universe, aliens could hoard stars

From Science News, June 19, 2018: Fermilab physicist Dan Hooper proposes that, to offset a future cosmic energy shortage caused by the accelerating expansion of the universe, a super-advanced civilization could pluck stars from other galaxies and bring them home. It’s a far-out idea, tackling a dilemma in a future so distant that human beings can hardly fathom it: 100 billion years from now, each neighborhood of the universe will be marooned as if on a cosmic island, with resources from the rest of the universe inaccessible.