Batavia, Ill.—Scientists of the DZero collaboration at the Department of Energy’s Fermi National Accelerator Laboratory announced Friday, May 14, that they have found evidence for significant violation of matter-antimatter symmetry in the behavior of particles containing bottom quarks beyond what is expected in the current theory, the Standard Model of particle physics. The new result, submitted for publication in Physical Review D by the DZero collaboration, an international team of 500 physicists, indicates a one percent difference between the production of pairs of muons and pairs of antimuons in the decay of B mesons produced in high-energy collisions at Fermilab’s Tevatron particle collider.

The dominance of matter that we observe in the universe is possible only if there are differences in the behavior of particles and antiparticles. Although physicists have observed such differences (called “CP violation”) in particle behavior for decades, these known differences are much too small to explain the observed dominance of matter over antimatter in the universe and are fully consistent with the Standard Model.  If confirmed by further observations and analysis, the effect seen by DZero physicists could represent another step towards understanding the observed matter dominance by pointing to new physics phenomena beyond what we know today.

Using unique features of their precision detector and newly developed analysis methods, the DZero scientists have shown that the probability that this measurement is consistent with any known effect is below 0.1 percent (3.2 standard deviations).

“This exciting new result provides evidence of deviations from the present theory in the decays of B mesons, in agreement with earlier hints,” said Dmitri Denisov, co-spokesperson of the DZero experiment, one of two collider experiments at the Tevatron collider. Last year, physicists at both Tevatron experiments, DZero and CDF, observed such hints in studying particles made of a bottom quark and a strange quark.

When matter and anti-matter particles collide in high-energy collisions, they turn into energy and produce new particles and antiparticles. At the Fermilab proton-antiproton collider, scientists observe hundreds of millions every day.  Similar processes occurring at the beginning of the universe should have left us with a universe with equal amounts of matter and anti-matter. But the world around is made of matter only and antiparticles can only be produced at colliders, in nuclear reactions or cosmic rays. “What happened to the antimatter?” is one of the central questions of 21st–century particle physics.

To obtain the new result, the DZero physicists performed the data analysis “blind,” to avoid any bias based on what they observe. Only after a long period of verification of the analysis tools, did the DZero physicists look at the full data set. Experimenters reversed the polarity of their detector’s magnetic field during data collection to cancel instrumental effects.

“Many of us felt goose bumps when we saw the result,” said Stefan Soldner-Rembold, co-spokesperson of DZero. “We knew we were seeing something beyond what we have seen before and beyond what current theories can explain.”

The precision of the DZero measurements is still limited by the number of collisions recorded so far by the experiment. Both CDF and DZero therefore continue to collect data and refine analyses to address this and many other fundamental questions.

The DZero result is based on data collected over the last eight years by the DZero experiment: over 6 inverse femtobarns in total integrated luminosity, corresponding to hundreds of trillions of collisions between protons and antiprotons in the Tevatron collider.

“Tevatron collider experiments study high-energy collisions in every detail, from searches for the Higgs boson, to precision measurement of particle properties, to searches for new and yet unknown laws of nature. I am delighted to see yet another exciting result from the Tevatron,” said Fermilab Director Pier Oddone.

DZero is an international experiment of about 500 physicists from 86 institutions in 19 countries. It is supported by the U.S. Department of Energy, the National Science Foundation and a number of international funding agencies. 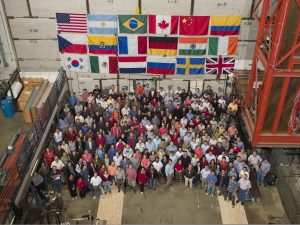 The DZero collaboration comprises about 500 scientists from 19 countries who designed and built the 5,500-ton DZero detector and now collect and reconstruct collision data. They research a wide range of Standard Model topics and search for new subatomic phenomena. Credit: DZero collaboration 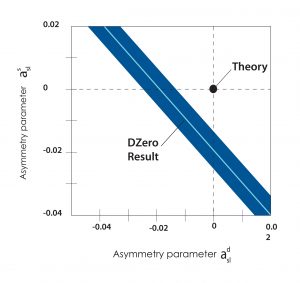 The DZero collaboration has found evidence for a new way in which elementary particles break the matter-antimatter symmetry of nature. This new type of CP violation is in disagreement with the predictions of the theoretical framework known as the Standard Model of particles and their interactions. The effect ultimately may help to explain why the universe is filled with matter while antimatter disappeared shortly after the big bang. Credit: DZero collaboration 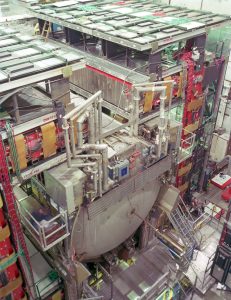 The Fermilab accelerator complex accelerates protons and antiprotons close to the speed of light. The Tevatron collider, four miles in circumference, produces millions of proton-antiproton collisions per second, maximizing the chance for discovery. Two experiments, CDF and DZero, record the collisions to look for signs of new particles and subatomic processes. Credit: Fermilab 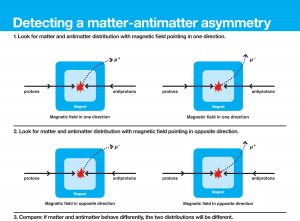 The DZero result is based on the comparison of the distributions of positively and negatively charged muons (μ+ and μ-) emerging from high-energy proton-antiproton collisions produced by the Tevatron particle collider. A strong magnetic field inside the DZero particle detector forces the muons that emerge from those collisions to travel along a curved path. Two muons with opposite charge follow paths that curve in opposite direction (see graphic). Scientists first compared the muon distributions when the the magnetic field inside the DZero detector pointed in one direction (configuration 1) and then compared their distributions when the magnetic field had been reversed (configuration 2). If the matter-antimatter symmetry were perfect, the comparison of the muon distributions in the two configurations would yield the same result. Instead, the DZero experiment observed a one-percent deviation, evidence for a matter-antimatter asymmetry. Credit: Fermilab